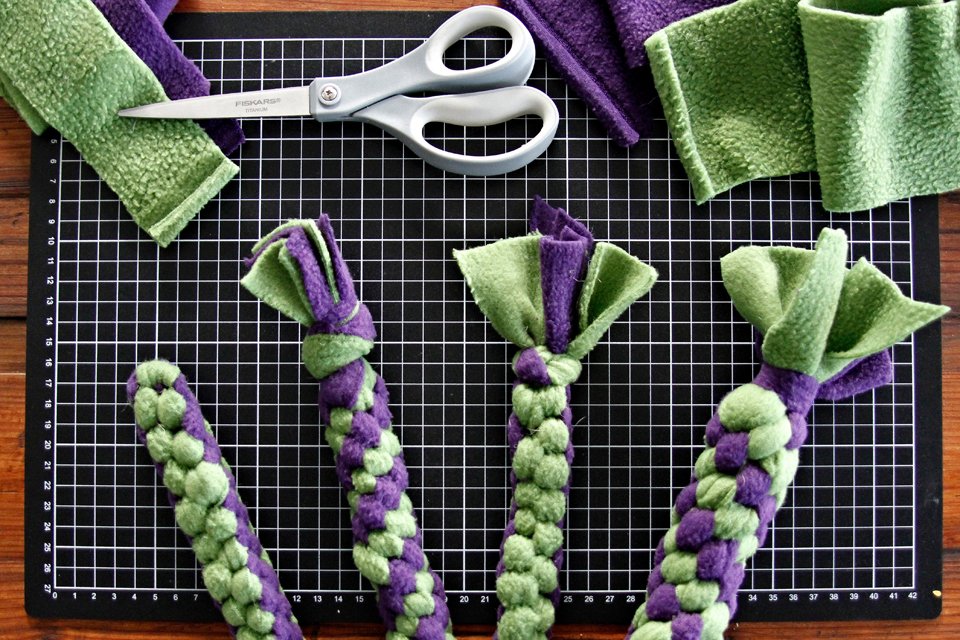 To Knot or Not to Knot?

Most (not all) woven fleece patterns are knotted in self-secure layers as noted above. Other DIY tug toy styles, like braids, need end knots to hold the toy together. Still, unless I’m making a special tug toy shape or design, I prefer to use end knots for all of my DIY dog tug toys. Even if the weave is self secure without them, the ends are the finishing touch and part of the tug toy fun.

Unlike braiding, one of the great things about most woven fleece dog tug toys is that each layer of the toy is itself a knot. Every layer is self secured and the tug toy won’t unravel if the end knot is untied. In fact, you don’t even need to knot the ends. The ends are already knotted in the last layer of the weave and every layer in between. Knotting the ends of a woven fleece tug toy does help the toy look more finished, though. It can also (depending on the knot) add extra security to the ends of the toy by making it more difficult for strands to be pulled loose from the end of the weave. Knots also make for good gripping points for hands, mouths, and playful paws.

There are all sorts of potential end knotting styles for tug toys. For braids and other tugs where the knots are holding the toy together, you’ll want to pick something extra secure. The rest is a matter of shape, size, design, and personal preference. Let’s look at some favourite easy end knots for DIY dog tug toys and alternative end knotting styles.

Overhand Knots for Finishing the Ends of Tug Toys

Unless fancy tug designs or the size of the tog/strands warrant special handling, my go-to method for starting and ending tugs is with a simple overhand knot using all of the strands together. This is a basic stopper knot, where the strands are looped together as one (single loop using all the strands). Easy, neat, secure, and it add a nice little bump that’s great for hands and mouths during tug play.

If you are weaving a tug with lots of strands or using very wide/thick materials, you may find the overhand knot too big and clunky for the look you want in your finished tug toy. In this case, you might want to modify the overhand knot or switch to a different knotting style. A looping overhand knot using one strand (or some instead of all) may be a more attractive way to knot the ends of your tug. It’s not as secure as the full overhand knot; however, as noted above, unlike braids, woven tugs won’t unravel.

Boondoggle Knots for Finishing the Ends of Tug Toys

If, like me, you used to make little woven bracelets when you were younger, you may be familiar with some of the weaving styles we use on fleece. The boondoggle end knotting techniques used with materials like gimp or paracord can be used with your fleece projects.

A boondoggle knot is neat and tidy, and smaller than an all-strand overhand knot. You can see a side-by-side of the overhand (top) vs boondoggle (bottom) in the last photo of the collage below. Boondoggle end knotting requires less fleece and is a slimmer finish. This can be a definite plus for some designs, but it takes more effort to correctly tie a boondoggle end knot. That’s the main reason why I default to the simple all strand knot in most cases. I like keeping things easy.

If using boondoggle end knotting, I find it easiest to start off with a temporary overhand knot that I later untie, then do the both completion knots after I’m finished weaving.

Unless I’m weaving a stick as part of making a fancy shape, I prefer knots. They’re easy, cute, secure, and fun! Our dogs and their friends love toys with flailing tassels and lovely knots for tugging. A single stick end is relatively easy to secure with a starting weave or concealed knot, but a double stick usually requires the tucking of loose ends that will eventually loosen their way free again during the stretchy fun of tug toy playtime. They can, of course, be easily retucked, but if the dogs love tassel tugs, why would I bother with sticks except for special shapes?

This is the most secure option if you want a tug with only one stick end. It can also be used as one end of a double stick; however, you will need to use an alternative method on the finishing end. The downside, as I’ll illustrate in the example photos below, is that you either need to have very long pieces of fleece or settle for a much shorter tug toy than starting from the end of your strips.

Weaving Directly from the Midpoints:

Starting the weave from the midpoints of two very long stands of fleece is an easy and secure way to weave one blunt end, but the finished tug will only be half as long. This is very secure, but only works for the starting end and can be size limiting. Weave a single starting knot, flip the strands so that the pretty side of starting knot becomes the visible stick end, then continue weaving the rest of the tug.

Weaving From a (Concealed) Starting Knot at the Midpoint:

If you find it difficult to position and start with the loose strands, you can tie the midpoints together in a small tight knot (placeholder), then position and weave the same way as above. Tie at the midpoint, position the strands, and weave a single starting knot. Then flip the strands so that the pretty side of starting knot becomes the visible stick end. Check your strand positions, then continue weaving the rest of the tug.

Starting the weave from the end of the strands using a small joining knot concealed inside the finished tug is an alternative to working from the middle. This is also secure and allows the full length of the strips to be used for a longer tug, but still only works for the starting end. To successfully use this method, you need to make the starting knot as small/tight as possible (trim excess if/as needed) and take your time at the beginning to conceal the end. Tie your joining knot, weave a single starting knot, then flip it. That way, the pretty side of starting knot becomes the visible stick end. With the joining knot now facing upwards, position the strands around it and weave around it, taking care to fully conceal the joining knot inside (trim excess if needed) as you continue weaving the rest of the tug.

Starting from the Midpoint vs. Ends

It takes more effort to get a tidy weave and fully conceal the starting knot, but this method performs significantly better in finished play than tucking (final method, detailed below). Joining the ends then overweaving minimises the risk of loose ends popping out of the tug. Visually, when done well, it looks almost identical to a midpoint start. By joining, you’ll have twice the length to weave with, allowing for a significantly longer toy from the same length of fleece. See below for a side-by side example of both methods using identical strands. What a difference! 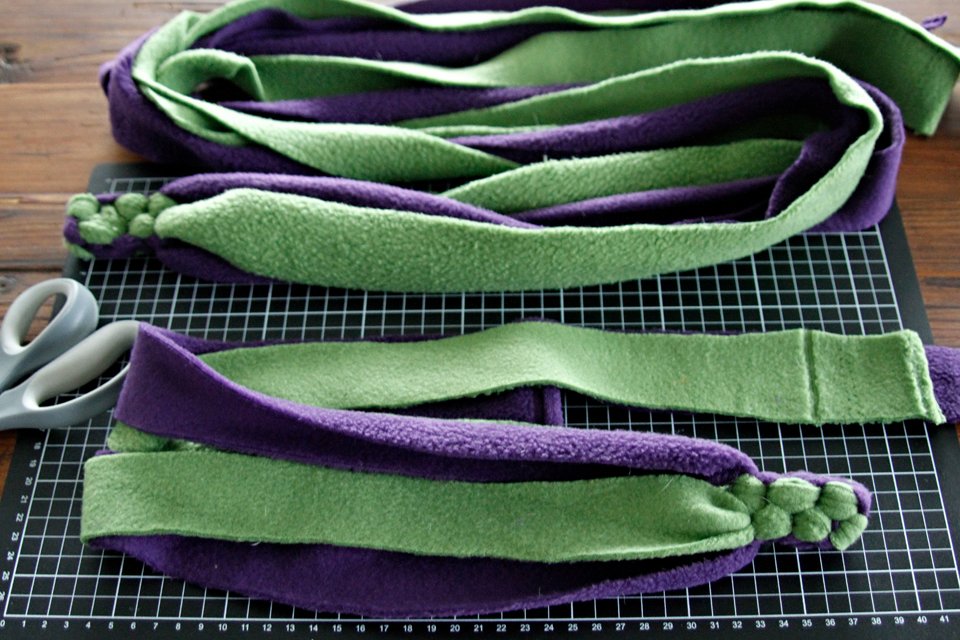 Concealing the Finishing End of a Stick Tug Toy

With any of the starting knot options above, you will have one stick end. These are starting knots only. The working end will need to be finished in a  different method. You can use any of the visible end knots for DIY dog tug toys above, or you can make a matching stick end.

Omitting a finishing knot and tucking the loose ends into the weave works for any end of a tug, but is the least resilient of the options. It’s simple, but less secure than a knot. On the plus side, it works at the completion end (or both ends if you’d like to use a temporary knot at the start of your weave). The better the tuck, the more secure. Fleece can be pushed (a small pointy object like the end of scissors or a pen can help) and/or pulled (needle or bent nosed pliers can help) to get the strands into place. Tucked? You can double check for security with a few stretch tests and repeat if/as needed. The ends might loosen or pull out from playing, but they can be tucked back into place.

But that sad little stick is doggone boring looking compared to an easy to weave and more secure knotted end tug, isn’t it? I always knot th ends, unless I’m using the stick as part of a special shape, like our candy cane dog tug toy. There are comparison photos for stick methods at the end of that post if you’d like some more visuals. Given the choice, Humphrey will always choose the knot and tassel too, cheeky rascal! 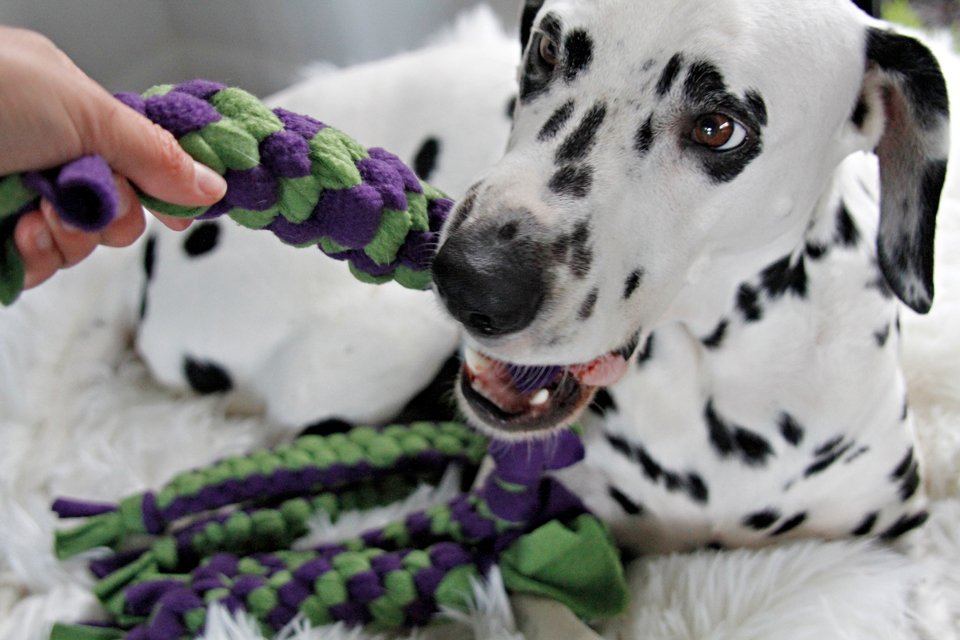 The methods above work for box/square knot tugs and spiral/round tugs, as well as many of the more complex patterns. Although these are the most common ends we use for standard fleece tugs toys, they’re not the only options. As with any creative project, your imagination is the limit! Sometimes, the weaving pattern, unusual or difficult strand materials (like in our tug of tugs), or special designs and shapes call for different end knots and finishing. When we share an idea here that needs different handling, we’ll include options in post, but you can put your own personal style and spin on any of our project ideas with whatever knotting style suits your personal preferences.

You can find all of our tug toy related posts under the DIY Dog Tug Toys tag. Helpful information is also available in the full collection of tug toy FAQs, tips, and troubleshooting in this mini-series: 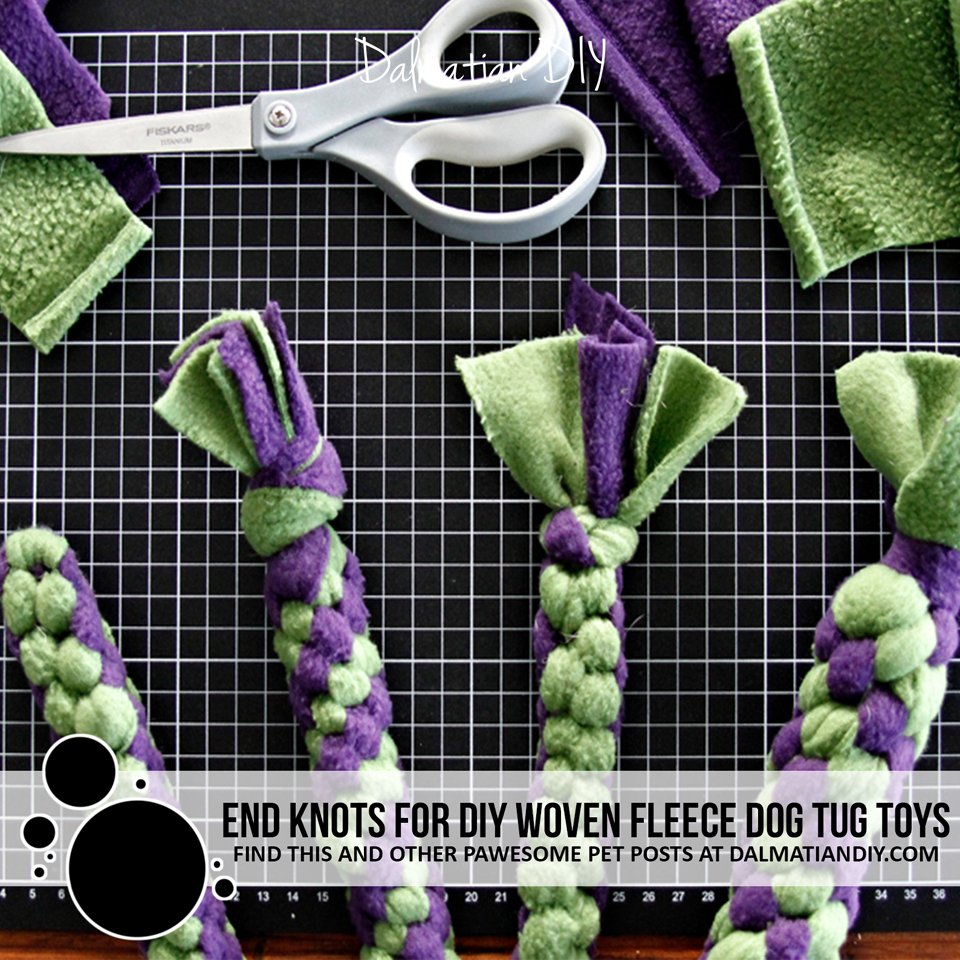