Whoot whoot! Birthday candle tug toy fun! What are we going to wish for, furfriends? Humphrey loves tug toys, so I decided to make him something extra special for his birthday. Check out our DIY birthday candle dog tug toy! It’s an extra special birthday toy for flame-free fun.

New to weaving? Beginner tug toy makers might prefer starting with a simple coloured tug to get comfy with the techniques before experimenting with some of our crazier projects, like this one. It can be tricky to gauge the scale if you’re unfamiliar with making tugs. In this toy you will also need to manipulate the starting point, shape of the tug, and transition joined materials. We’ll show you how in detail below.

How to Make a DIY Birthday Candle Dog Tug Toy

The corner-to-corner spiral weave was used in making this tug. The pictured birthday candle tug toy was made using two wide strips for the candle (one white, one blue) woven from their midpoints (four working strands). The spiral weaving pattern creates the natural spiralling colours, mimicking a classic spiral birthday candle. Black fleece is then layered into the tug to create a transitional wick, followed by yellow for the candle flame. The flame portion is tied increasingly tighter to create the appearance of a flame tapering to the tip of the toy.

To create your own similar birthday candle dog tug toy, you will need:

To weave a toy as shown, clean fabric is cut as follows:

You can scale the size of the tug toy to suit your dog and your materials by altering the width and/or length of the fleece strips. See our post on tug toy sizes and the notes at the end of this post for additional tips, if needed. If you’re using a different weaving option, take the DIY below as inspiration and adjust the methods to suit your weaving patterns. A double twisted tug toy for the candle would look awesome! 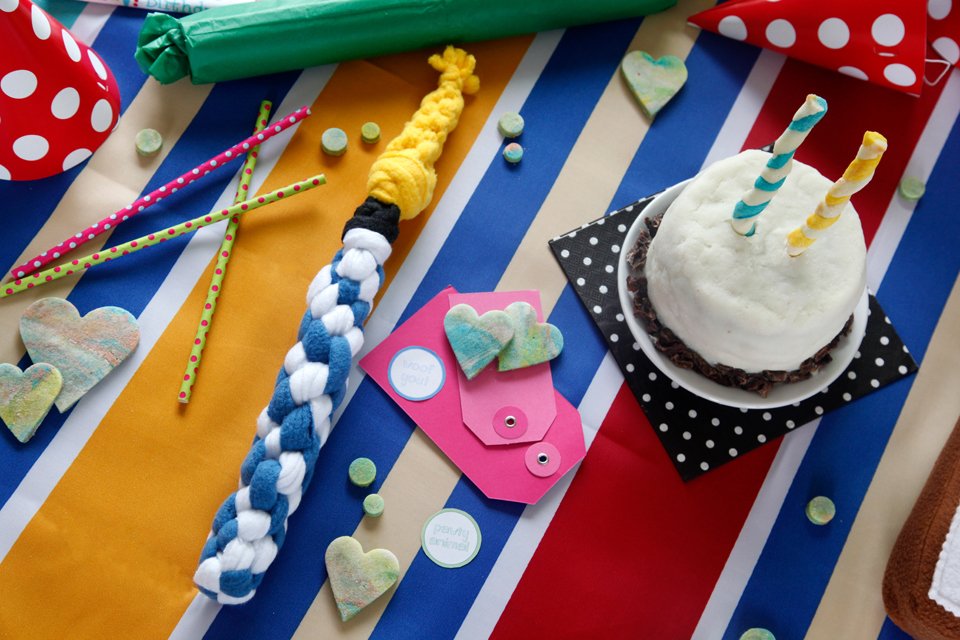 Making the Candle Portion of the Tug Toy

The birthday candle is woven from the midpoint of the two long strips (blue and yellow) to create a stick end tug. It uses a spiral weaving pattern to create the spiralling colours in the body of the candle. Detailed instructions as well as additional diagrams and step-by-step photos for this weaving method are available in our comprehensive post on making spiral dog tug toys. See our post on end knots for fleece tug toys for alternatives to weaving from the midpoint of two strands for creating the stick end at the bottom of the candle.

The two long strips form four working strands when weaving from the midpoint.

If you find it difficult to position and start with the loose strands, you can tie the midpoints together in a small tight knot (placeholder), then position and weave the same way as above. Tie at the midpoint, position the strands, weave a single starting knot, flip the strands so that the pretty side of starting knot becomes the visible stick end, then continue weaving the rest of the tug. See our post on end knots for DIY dog tug toys to see the midpoint methods in detail.

Adding the Flame Portion of the Tug Toy

Transitioning from the candle to the wick:

The wick is optional. If you decide to leave it out, skip this section and proceed to the instructions for the flame further below.

Transitioning from the wick to the flame: 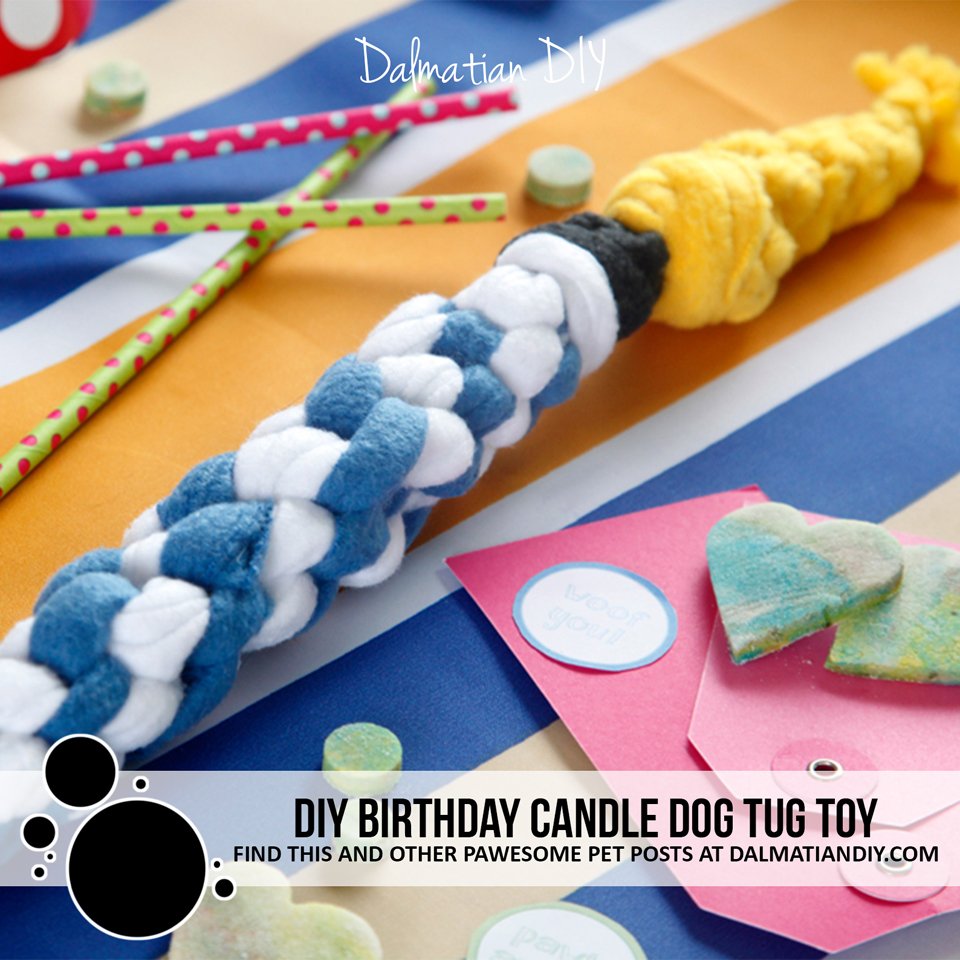