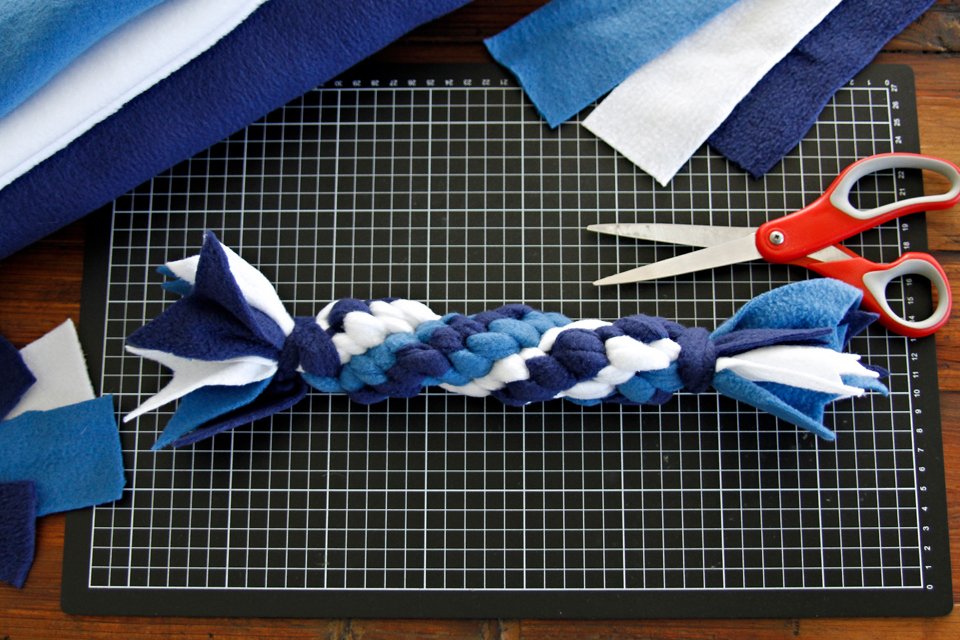 As promised, by reader request we’re sharing a few dog-friendly Hanukkah ideas, and here’s the bonus DIY! We were asked for a blue version of our free dog treat labels for Hanukkah and decided to treat you to a bonus Hanukkah tug toy DIY. We love our furfriends of all shapes and spots, and it’s pawesome when you send us a request to create something special for your holidays and events that we might not be celebrating ourselves. Any excuse for extra toys and treats, really! Heheh. Woven fleece tugs are easy to make in any colour combo and a great way to DIY a holiday toy. Here’s our blue and white twisted double spiral DIY Hanukkah dog tug toy.

No matter what the reason or season, did you know that blue is a great colour for dog toys? One of the things we learned while trying to support senior dog Oli with declining vision is that dogs see colour very differently to humans. Most dogs see on a spectrum of blue-yellow, unlike our human red-blue-green. Blue and/or yellow are the dog version of “high-vis”. We even created a special high visibility dog tug toy.

As noted in our dog vision post, our new knowledge won’t change most of the toys and other projects that you see here on the blog. Many of the toys we make are for special occasions, styled for a combination of dog fun and human preferences, especially holiday or occasion toys. Dog toys we make (and buy) are usually more about the shape, texture, toughness, and other attributes than the colours of the toy. Our dogs love fun more than looks. Humphrey definitely enjoyed playing with his new blue tug toy, but he enjoys his tug time fun in any colour.

I like to use fleece for making DIY dog tug toys.  Silver polar fleece (or most fabrics) isn’t really an option though. At least not without potentially unhealthy or unsafe glittery materials for dogs. Grey seemed like a bit of a bland silver substitute for such a festive tug toy. There are plenty of beautiful blues to choose from though, and white is always easy.  I used two shades of blue with white in this six strand tug toy.

Any of our DIY dog tug toys can be easily adapted to Hanukkah (or other holiday) colours. I opted for a six strand toy using the twisted double spiral weaving pattern. It creates a great looking tug when woven with sets of complimentary or contrasting colours. Plus it’s deceptively easy, too.

To make your own twisted double spiral tug, you will need six long strands of fleece. The toy shown is made using two dark blue, two light blue, and two white. It’s made exactly like our twisted double spiral Valentine dog tug toy, but a little smaller. I was running low on white fleece in the craft stash and only had shorter pieces left. To economise, instead of tying an all-strand loop knot, I used short pieces of dark blue to securely tie the starting and finishing end knots. For a little extra flair, the loose tassels at the ends were cut with v-shaped notches.

Looking for more doggone great Hanukkah ideas? Adding a touch of colour to any treat or toy is an easy way to make things a little more festive. Alternatively, you can keep the toys and treats simple and just add a pop of colour with wrapping. The requested holiday dog treat and gift tag and label freebies that inspired this tug toy are able in our previous post. Happy Hanukkah to those of you celebrating! We wish you a joy-filled Hanukkah season, filled with light, laughter, family, friends, and fun.

Looking for pet-friendly holiday and special occasion ideas? We take requests for future posts, and have created dog-friendly holiday DIYs, recipes, freebies, and more (including for holidays and occasions we don’t celebrate ourselves). We can’t turn every special request into a scheduled post due to planning and other constraints, but will try to help with ideas where we can! 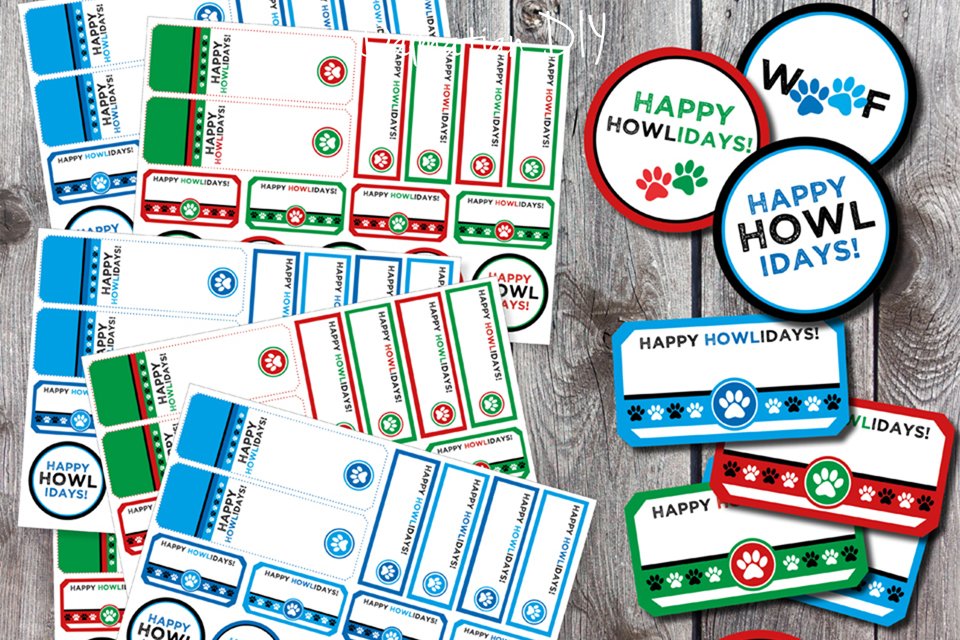 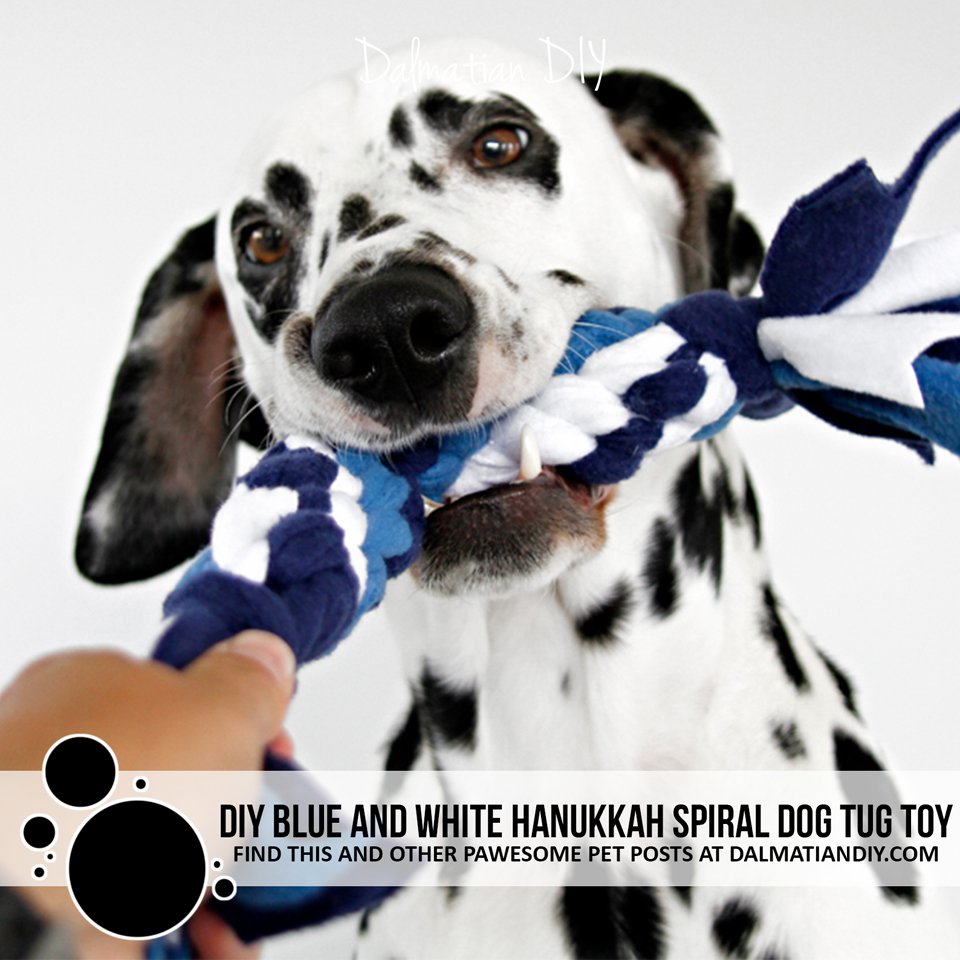