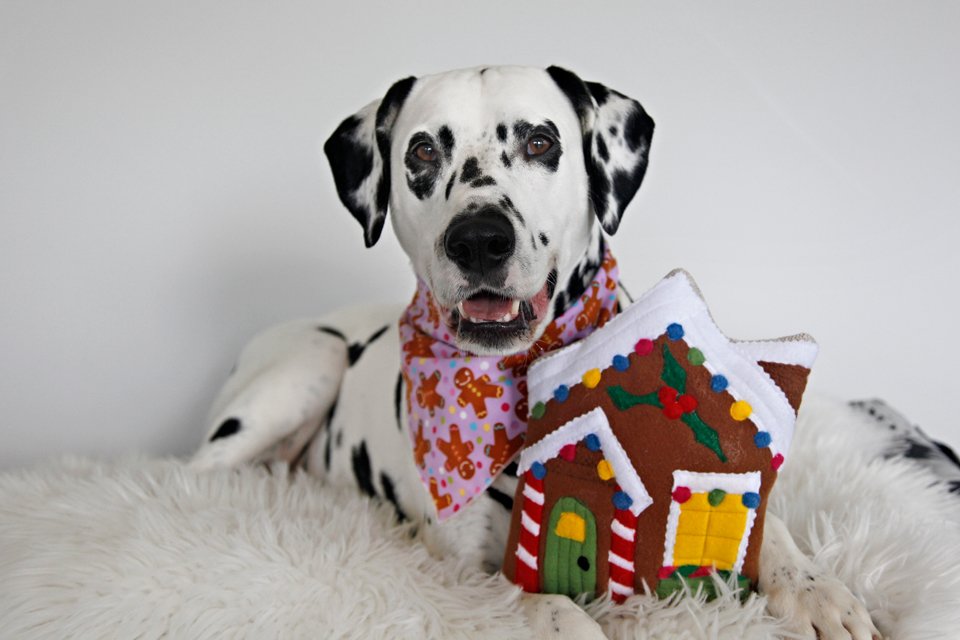 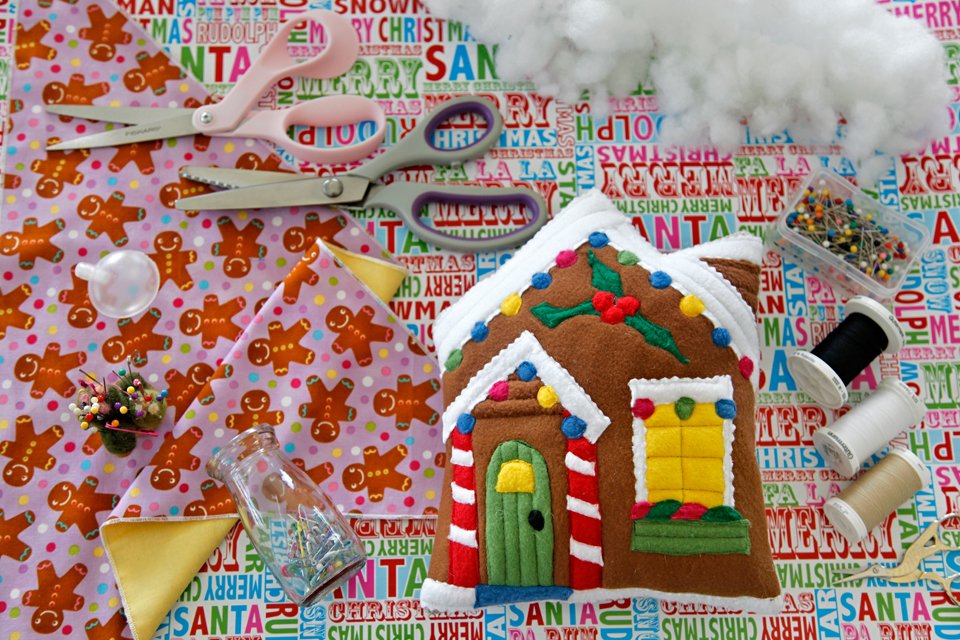 Stuffed dog toys follow the same basic principles as you would use if sewing (or buying) for a small child – no loose parts to nibble free and everything securely stitched into a sturdy toy. It is particularly important to know your pet and how they play before making or buying toys. Not all toys are suitable to all pets. Check out our post on toy safety for helpful links and resources.

Like most of our DIY stuffed dog toys, this DIY gingerbread house project is an inspiration that you can take and use to create your own unique designs. One of the great things about making your own toys is that’s is a fun opportunity to get a little creative. The shape, size, colours and embellishments can all be adapted to suit your skills, pet, materials, and style preference. Your imagination is the limit!

Humphrey is a big fan of triangle toys, like our pizza slice dog toys or the coordinating set of Christmas toys in our archives with Santa Claus, a holiday elf, and a Christmas tree. I was tempted to go with a pointy design for my gingerbread house, but decided to go with a more conventional house shape. If you’d like to make a gingerbread bone instead, you can check out our birthday bonenut sprinkle cake dog toys for the basics and change the embellishments or colours for a festive theme. 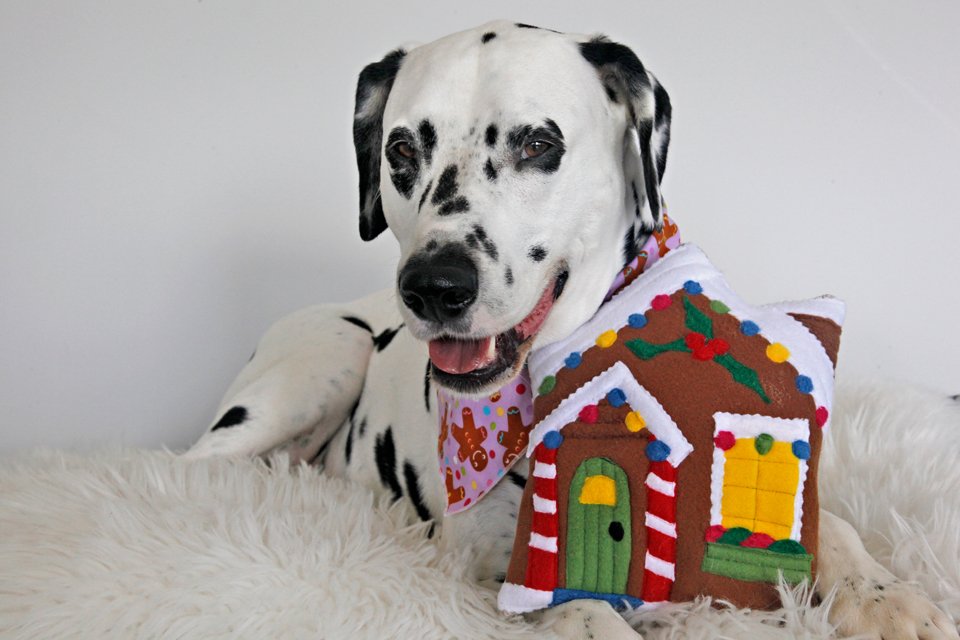 How to Make a DIY Stuffed Gingerbread House Dog Toy

I try to salvage squeakers in our DIY dog toy hospital for reuse when possible, but I also have packs of replacement squeakers in different shapes, sizes, and sounds. Squeakers can be tricky to find in shops. Try the toy section of large craft shops or look online at specialist suppliers or large retailers like AliExpress or Amazon. You can check out the replacement dog toy squeakers on Amazon (affiliate link) for product examples and ideas.  All of the materials used in this project were either in my craft stash already (fabrics, fleece, thread) or salvaged (stuffing, squeakers). Fun and “free”! 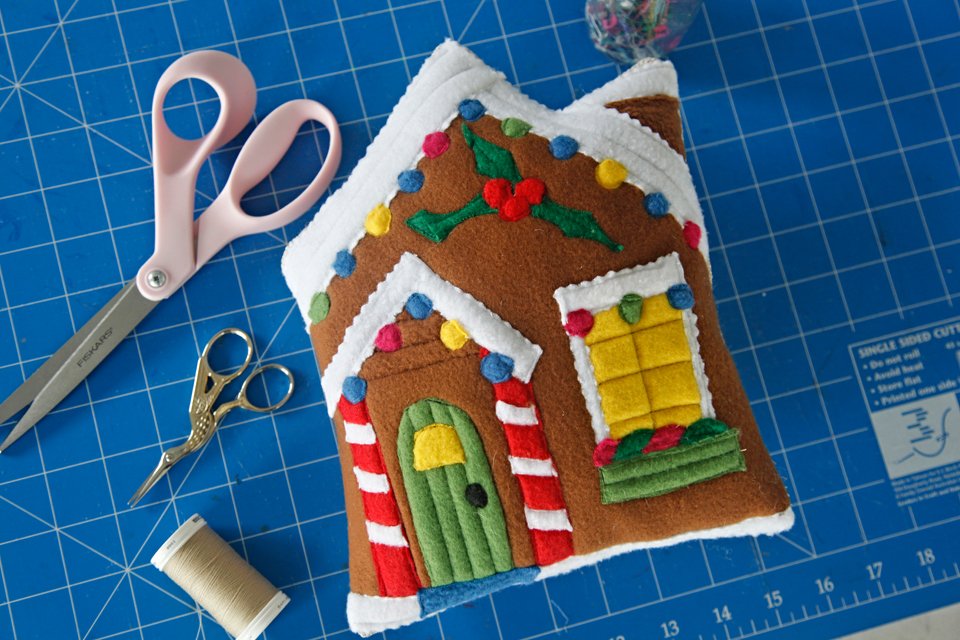 Because fleece is colourfast and doesn’t fray, it’s an easy option for embellishments, like these accents, on dog toys. I keep fleece off cuts from other sewing projects and tug toy ends for embellishment supplies. It’s also very forgiving to sew, since the stitches of coordinating thread often seem to disappear into the fluff. Secure sewing is still very important, though. No matter what the material or technique, security and safety are more important than looks for toys.

I used a darker brown fleece because my sturdy base beige from the craft stash was too pale for gingerbread, and layered that with white “icing” for the main elements of the gingerbread house. My icing was cut with pinking shears instead of straight scissors for a little bit of extra style. The house goes into the seam allowances at the sides, but stops short at the top/bottom, keeping the edges of the icing visible. My decorations include a porch with candy cane pillars, front door with mat, window with window box, holiday lights, and a big spring of holly. I was going to make a wreath for where the holly is on the house, but decided to make holly using some of my small green scraps instead.

Cutting and shaping the materials:

Tiny pieces of fleece can be tricky to position and sew. Depending on your embellishments, you might find it easier to attach and then trim some of the smaller pieces, like the example shown in the white strips on my candy cane pillars in the collage below. Of course, the dogs won’t be judging on looks, just fun. That’s one of the best parts about DIYs for dogs!

Note in the second to last photo of collage above how I’m using my binding clips to help keep the excess from my large piece of base fabric out of the way while turning and sewing on the embellishments. Very handy! Straight pins, safety pins, bull clips, or clothes pins can work as similar helpers, too.

Sewing and stuffing to finish the toy:

Eagle eyes may have noticed that Humphrey is wearing a gingerbread man (or person) bandana in the photos above. It’s one of many bandanas in his wardrobe and was made the same was as our DIY dog bandanas with serged edges. It’s one of my favourite ways to make a dog bandana, but if you don’t have a serger/overlocker, there are lots of other DIY dog bandana making methods (sewn or no-sew) in our archives. All you need is some gingerbread patterned fabric and you’re good to go!

Alternatively, you can use a plain bandana base (bought or made) and dress it up with gingerbread iron-ons (see our Cricuit crafts for tips and ideas), fabric ink and stamps, or fabric paints like our no-sew DIY ugly Christmas sweater dog bandana. 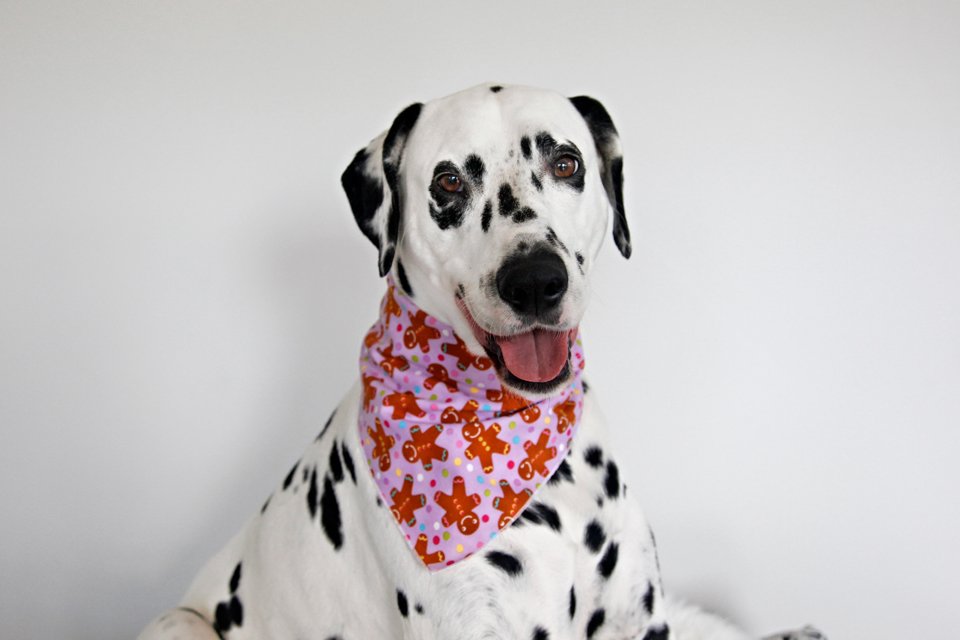 Human gingerbread often contains heaps of sugar and sometimes spices that aren’t suitable for dogs.  It’s safer if you pick a gingerbread-inspired dog treat recipe. Blackstrap molasses is one of my favourite add-ins for a gingerbread colour and scent in dog treats. It has some of the same scent elements as brown sugar, but without the sweetness and a little goes a long way. Ceylon cinnamon and ginger are yummy too in small quantities. See our molasses and peanut butter gingerbread dog treats for an easy example recipe.

Even without a gingerbread treat dough, you can still go for looks with gingerbread cookie cutters. You can use simple cookie cutters, dress them up with stamping or other embellishments (see our post on decorating homemade dog treats for ideas), or play with all-in-one holiday plunger cutters like the example shown below. Look at these old photos of Oli and Humphrey from last Christmas, eyeing up their taste test nibbles before gift deliveries to furfriends.

As tempted as I’ve been to make a gingerbread dog house, the whizzles of impatience and excitement from the boys when I made our DIY dog treat wreath taught me that edible decorations are best limited to gifting or rapid disassembly around here. Haha! That said, if you’re keen to try, you can have some fun with your favourite roll-and-cut dog treat dough. Melted carob is a handy edible glue option (and decorating method).  See our stacked star Christmas tree dog treats to see an example assembly.

Rather than making the house out of treats, you could make a cardboard gingerbread house fill it with treats as a holiday gift box. It’s probably best if you give them to the humans for safe keeping though. Hehehe. I know that Humphrey definitely couldn’t be trusted with a box of treats under the tree. Although he’d be happy to rip it up for the recycling afterwards, if the materials are suitable. Check out these super cute DIY gingerbread house gift boxes (The House that Lars Built) or the free cut file or printable gingerbread house treat boxes (The Craft Patch Blog) for examples. 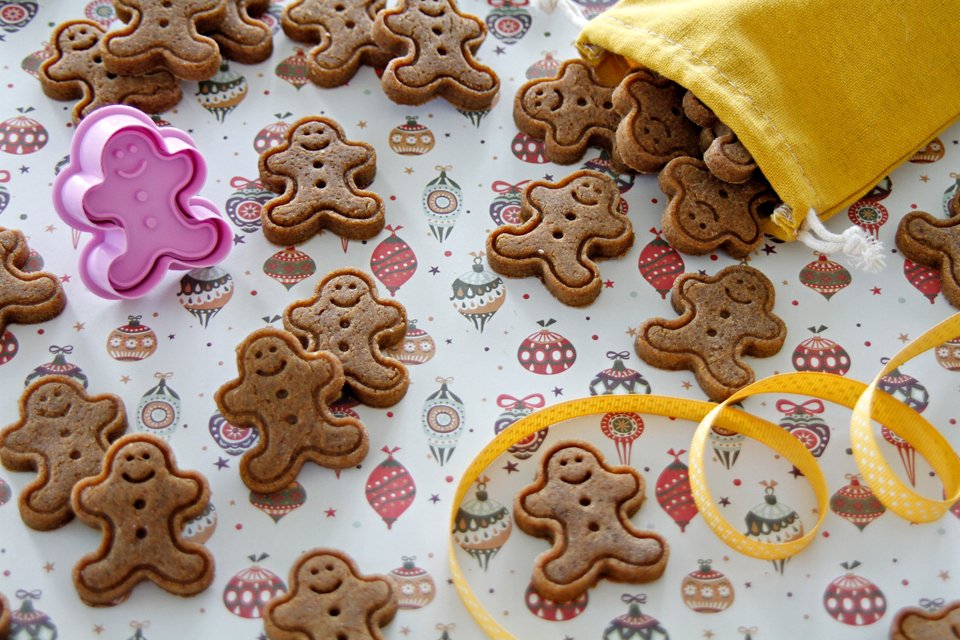 Back and Waiting for Christmas Squeaking!

Back to the squeaky goodness for a final squeak and smile before we sign off. Our DIY gingerbread house dog toy has been tucked away for Christmas squeaking and carolling, but I let Humphrey have a few quality control squeaks and nibbles first for pictures. And for fun. The clever lad always knows when I’m making toys. He is rather nonchalant during the cutting and sewing stages, but moves in like a shark circling in anticipation when he sees me sitting at the counter to hand sew the toys closed.

Safety first, furfriends! Remember, no matter what a toy is made of or how it’s made, toys are meant for supervised interactive play. Know your dog before giving him or her any new toy. Some dogs try to eat toys or parts (whether bought or handmade) and that’s dangerous. Toys are for playing, and playtime is always safer (and more fun!) with you involved. You can read more in our dog toy safety post, including tips and helpful links for safer playtime. Have fun and play safe! 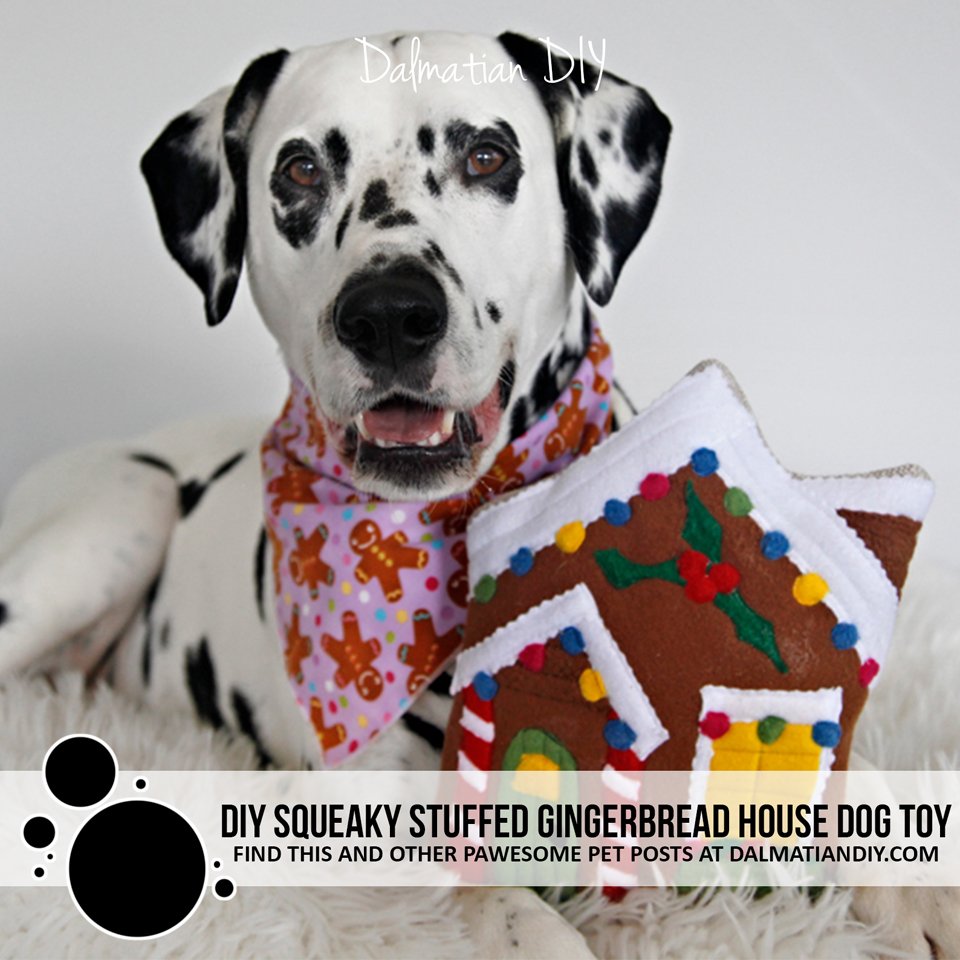