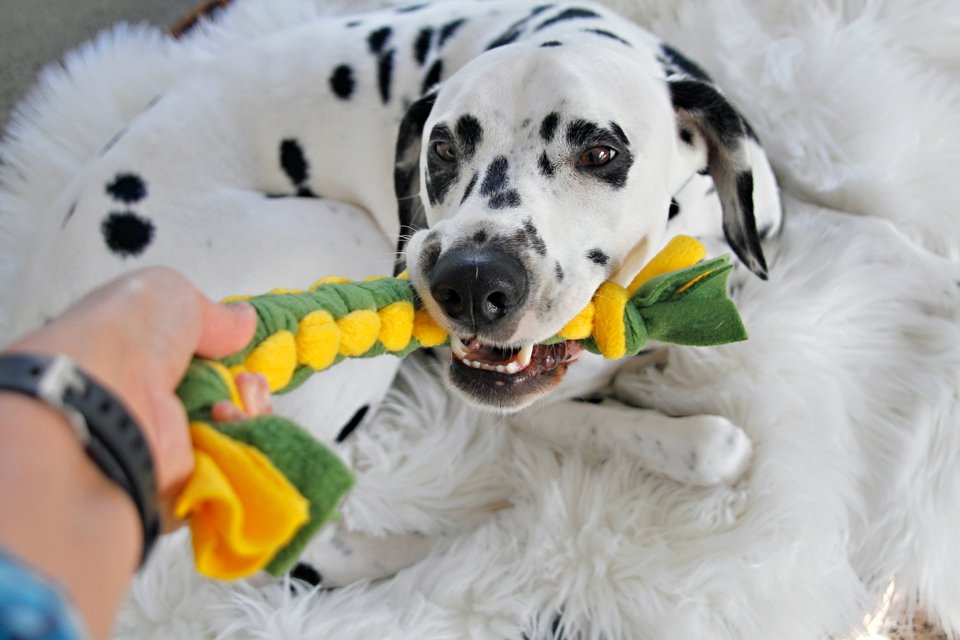 Feel like trying something a little different? Here’s how to make a DIY cobra knot dog tug toy. My go-to tug woven fleece tug toy knots tend to be square or spiral; however, most macramé or boondoggle knotting techniques can be adapted for toy making. For added safety, I prefer using weaves that involve knotting instead of braiding or looping when making tugs for my pets. This DIY cobra knot dog tug toy uses a thickened multi-strand variation of the basic cobra stitch or knot, which you often see in lanyards or paracord bracelets and keychains.

Getting to Know the Cobra Knot

The basic cobra is woven with a minimum of three working strands, although the middle strand is often doubled. The middle strand acts as a stationary core around which the side strands are incrementally looped and crossed (half knots) to wrap the core.

Doubling up the middle allows longer pieces to be arranged at a starting point. That way, a cobra knot lanyard or bracelet can be untied into longer usable paracord or rope, if needed. With stiffer cords, it also helps to add width to the design. Untying for future use isn’t a factor in a tug tug, but you might like fattening things up. We’re using extra strands of fleece in the middle and sides of our DIY cobra knot tug toy.

For this fattened tug toy version of cobra, we’re working with five strips of fleece. It uses pairs in the side strands and a long middle strand that is doubled over at the starting point. This gives us a thick paired hidden core, as well as thick paired working strands. The result is a nice sturdy fat tug toy where the cobra pattern completely conceals the inner core, if carefully tied.  Using pairs of fleece is one of the tricks I like to use for making larger sturdier dog tug toys. Curious? Check out our tips and tricks post on DIY fleece tug toy sizes for the full scoop.

The fully concealed core is a great way to use leftover material. In stretchy play, however, the core will often still be visible. If that bothers you, choose the same colour as your “over” strands (green in my case) for camouflage. Personally, I don’t like rope because of dog toy safety issues, but it would be feasible for a rope core to be wrapped in fleece for a firmer tug or to weave completely with rope or other materials. 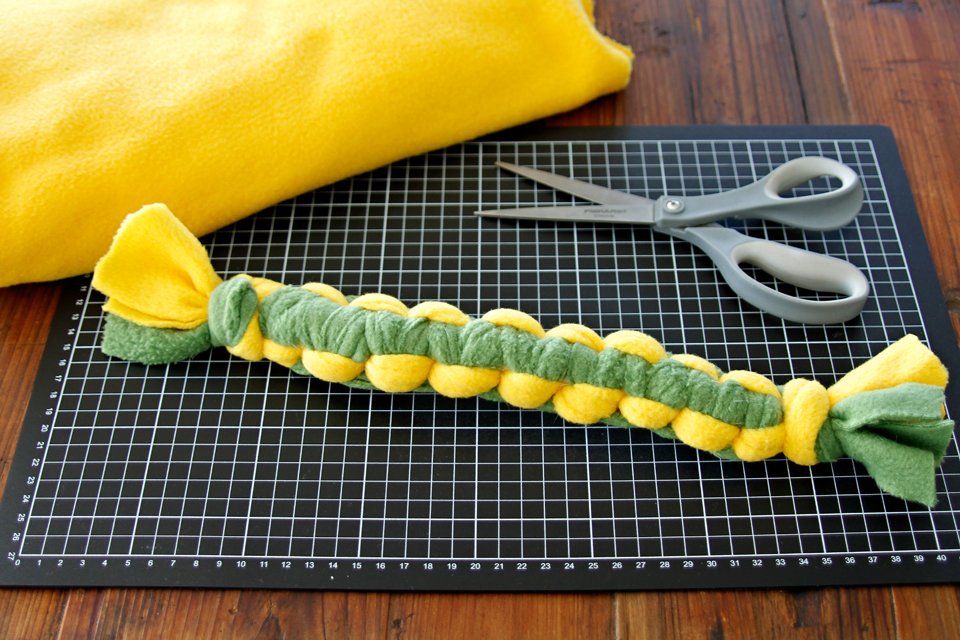 To make a similar cobra knot dog tug toy, you will need:

Ssssssssnakey! For my DIY cobra knot dog tug toy, I opted for a snakey green and yellow combo, and used multicoloured scrap fleece for the core. Thankfully, toys are the only snakes our dogs are likely to encounter here in New Zealand. Eek! Have you met our squeaky snake toy?

Since I was working with the natural width of my fleece fabric for efficiency, the starting strips used in this toy were of similar length. Two green, two yellow, and one multicoloured. Note that my multicoloured inner core is just one strip, but it’s doubled over from the middle in the tug. Since the core is just being wrapped, you will need more length in the working strands than the core. You need more length on the side strands for all that looping and knotting. Plus extra for tying the end knots, too. Your finished tug toy size will vary depending on the thickness of your materials, length and width of the strips, and tightness of the weave.

Starting knot for the weave:

If you don’t care about concealing the core colour, you could use six strands and start things off with an overhand knot or you other preferred style of standard tug toy end knot. For a fully concealed core, I’m using a modified overhand knot to secure the strands at the starting point.

Weaving the body of the cobra tug:

The body of the cobra knot dog tug toy is woven by incrementally by wrapping the A Strands and B Strands around the core, alternating positions from side-to-side in a series of half knots. The over strands (A Strands) create the visible middle of the body (green in this tug). The under strands (B Strands) frame the sides of the body (yellow in this case). This combo creates the snake-like pattern of the cobra weave.

The weaving sequence for the cobra alternates as follows:

Repeat this side-to-side alternating sequence until nearing the end of the strands, ensuring that there is enough of the working strands (A Strands and B Strands) remaining to allow a finishing knot. For a tidy pattern, keep the working end secure as you weave. I like to weave seated and nip mine between my knees. It’s simple and effective.

Options for finishing the working end at completion:

Options for finishing the ends depend on how secure you’d like the ends and if the core needs to be fully concealed. The pictured cobra knot dog tug toy has a fully concealed core. You can’t see it, even in the end knots. It requires a little extra finishing effort; however, our dogs definitely wouldn’t object if the core ends were visible. Humphrey loves a tasselled tug, so the more the merrier. Haha!

To hide the core at the finishing end knot:

For a simple tie off with core strands visible in the tassel: 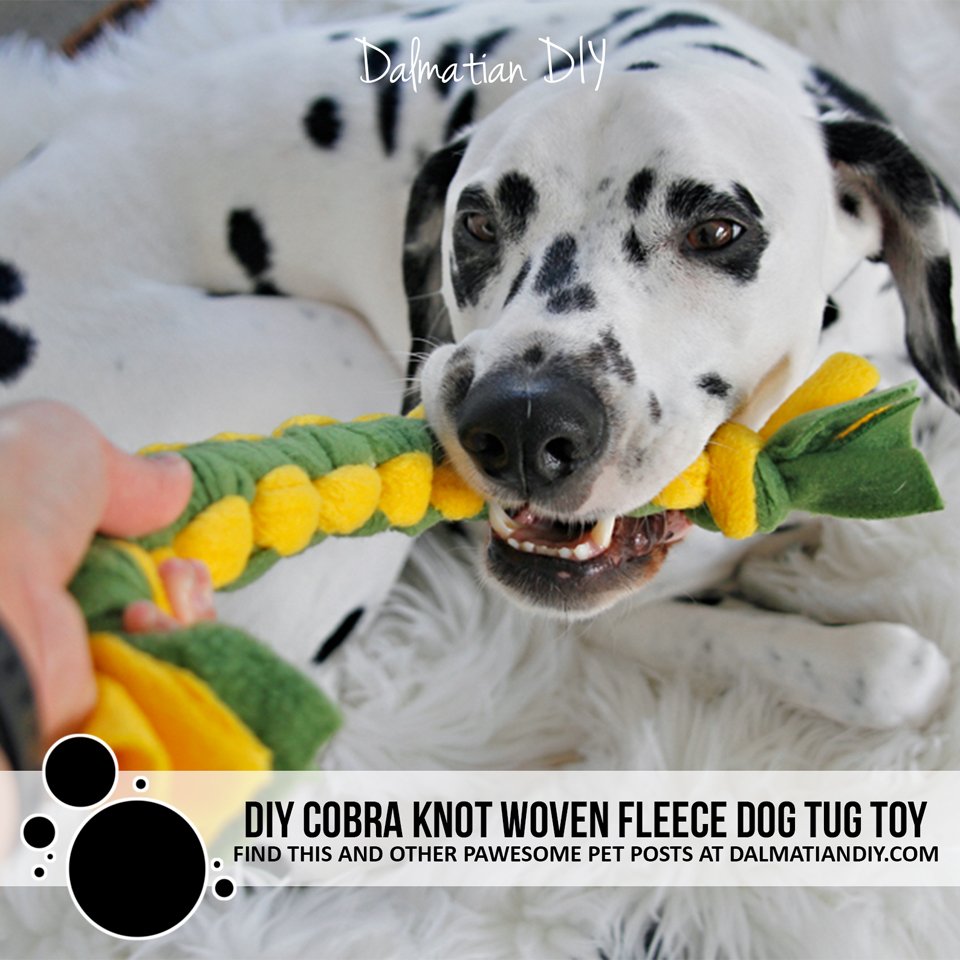