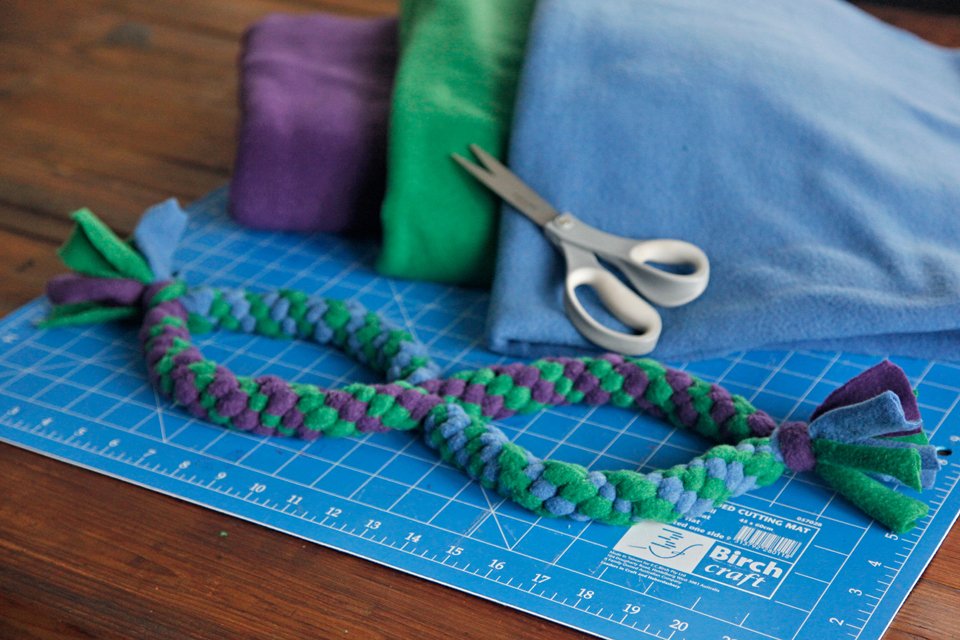 Double the loops for double the fun! These DIY infinity loop dog tug toys are an easy variation on a standard spiral (or square) weave tug toy. Don’t let the optical effect of the continuous curve (the purple and the green tug in this example) trick you into thinking these are difficult to make. Here are all the DIY details with options for making your own DIY infinity loop dog tug toys and more.

I created this post as a special edition for the blog after a reader question about making double loop (infinity loop) dog tug toys. They’re busy crafting toys for their local shelter, so I thought I’d help virtually with some options for loops including step-by-step photos. Crafting it forward. We can’t turn every special request into a scheduled post due to planning and other constraints, but will try to help with ideas where we can either here, on social media questions, or via email. Let’s dig into options for making DIY infinity loop dog tug toys. Woofs! 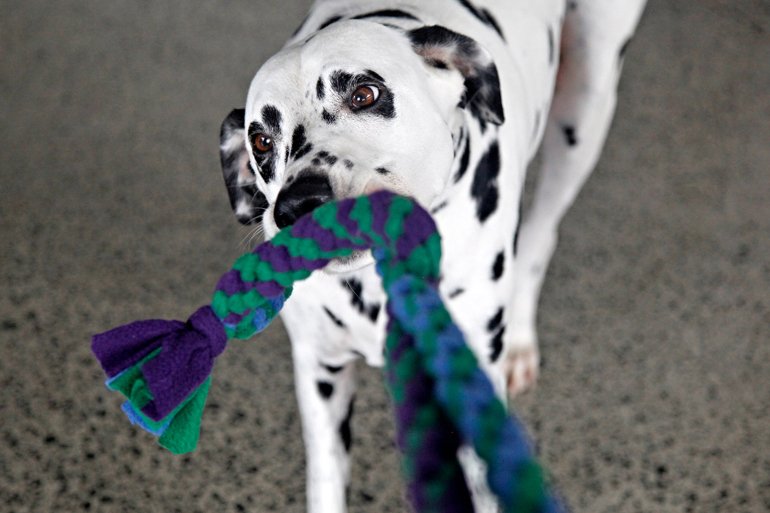 The spiral weave was used to make the double loop DIY infinity loop dog tug toys pictured in this post. The pictured toys were each made using two sets of four long strands (see colour tips below). These sets of four were woven to create two tugs that intersect at their midpoints. Their ends were then joined to create loops and finished with tasselled end knots.

As an alternative infinity loop dog tug toy demo for comparison, I also made a tug using the same cross-over technique, but with square box knot weave. I prefer weaving with the rounded spiral for this style of loop tug toys, but wanted to show you both patterns.

I’ve used different colours on the bodies of these infinity loop dog tug toys to help make the visuals easier to follow. It also looks pretty doggone cool when the intersecting loops are finished, not that the dogs care about such things! They’re all about the fun, not the looks.

Using different colours helps to show the visual effect of one tug passing through the other as a seemingly uninterrupted spiral at the midpoint. Using a shared colour is optional, but can be helpful in creating that visual effect. The shared colour (green in these example tugs) is what allows hidden shared strands to be knotted together at the midpoint, if using that method. The pass-through method works with whatever colour combinations you wish. Using the same colours for both sides of the tug is a little more forgiving for joining tugs, but you’ll miss out on seeing the optical illusion. Again, the dogs won’t mind either way!

The materials and craft supplies used in making these DIY infinity loop dog tug toys are:

A basic tug toy made with these weaving styles uses four long narrow strips for fabric. We’re making two for joining. Each of our double loop loops are made by joining two tugs at the midpoint and ends, so they require eight long narrow strips of fabric (two sets of four).

You can scale the tug toy to suit your dog by altering the width and/or length of the fleece strips. See our post on fleece tug toy sizes for tips and tricks. In the toys shown, I worked with approximately 5cm x 2m strips; however, you can make them larger or smaller to suit your dog and the size of fleece you have available. Making a double loop using just one tug body is possible, but it would require a huge length of fleece to make a similar size tug this way. 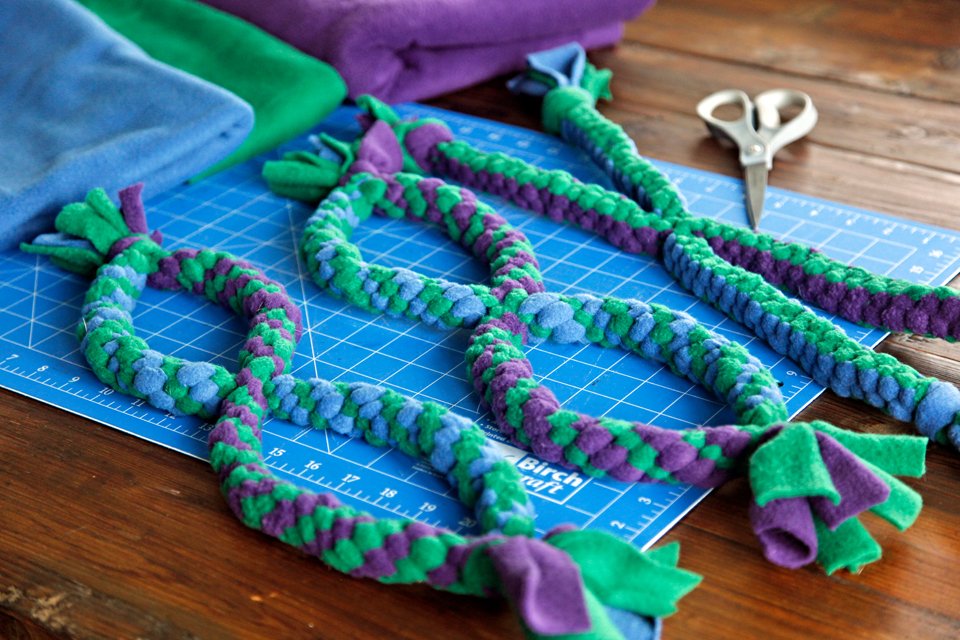 This is my easy (probably easiest) method for a double loop. Or for tug toy joints in general. When done with care, the finished tug is tidy, tightly joined, and secure.  It’s a very easy way to join the bodies of two tugs a perpendicular path. With a little extra effort, you can join them in any direction or angle. You can join more than two tugs too, if you’d like! We’ve shown this method before with some of our other DIY dog toys, including our X in the Valentine’s Day hugs and kisses tug toys and closing very simple loop tug toys. For safety and stability at the joint, take care with the strand placement to make sure it can’t pull all the way through during play, especially when making loops.

If you aren’t sure about gauging the midpoint for crossing the loop, you can mark one of your strands from each group as a check point on your weaving. Keep it light so you can hide it in the finished tug, or use a removable mark, like a small piece of tape.

Weaving the first half of the tugs:

Crossing the tugs at the midpoint:

Note: If all the strands are bunched together, the tug passing through the intersection might still get tugged hard enough to squeeze through the tight joint during rigorous pulling and stretching. As a slippage precaution, you can split up the through strands to make the tug sturdier and safer since these are loops. You could do this by splitting how they pass through the other tug’s strands in a single layer, or by splitting through on two adjacent layers. Strand sharing between tugs, as shown below, also creates an intersection with a secure joint.

Uhhh ohhh… Missed the mark? No worries! You can also carefully push or pull strands through a finished tug to create a pass-through join instead of knotting in position during construction. For pushing, a small pointy object helps. For pulling, needle nosed or bent nosed pliers (I use my beading tools) can help you get the strands through, if needed. The same note about splitting strands for a more secure applies.

For best visual effect, follow the same order in your corner-to-corner pattern as the first part of your tug. Switching the order will reverse the direction of your spiral.

Closing the ends of the infinity loops:

When joining the ends, if you find that eight strands is too much bulk for your usual end knotting techniques, you can try an alternative method to tie-off the ends of the tug toy. Make sure it’s securely tied as the ends of loops tend to get a lot of tugging during play.

Alternatively, you can knot shared strands at the midpoint instead of simply passing through. This makes a nice sturdy connection. To do this without altering the visual appearance of the tugs, the shared strands must be the same colour. The example double loop tug toy shown here uses two shared green strands. Each tug has two green strands, with a woven connection transitioning between tugs at their intersection.

Using the Techniques with Square Weaves Instead of Spirals

Spirals are slightly more forgiving on the join than square tugs (in my opinion). Plus spirals feel like a natural fit for an infinity loop; however, both of these techniques also work with square knot tugs. I made one as an example to include with the post and decided to leave the ends individually knotted, like a giant X with four ends to play with. Humphrey loves a good tassel battle!

The methods above are just two easy ways for weaving a double loop (or X) tug toy. The dogs don’t judge on looks, only fun, so toys are a great opportunity to get creative and experiment a little.

The techniques above can be used to join more than just two loops or crosses. You can combine as may loops and/or tails as you’d like in a toy. For a different approach, you could also make chain links with single loops.

You can also come at it from a totally different approach too, of course! Did you see the combo double loop and tug toy that I made when Humphrey and puppy pal Cooper started playmates together? Crazy fun!

Happy crafting, experimenting and (of course!) playtime together, furfriends! Woofs!

Safety first, furfriends! Remember, no matter what a toy is made of or how it’s made, toys are meant for supervised interactive play. Know your dog before giving him or her any new toy. Some dogs try to eat toys or parts (whether bought or handmade) and that’s dangerous. Toys are for playing, and playtime is always safer (and more fun!) with you involved. You can read more in our dog toy safety post, including tips and helpful links for safer playtime. Have fun and play safe! 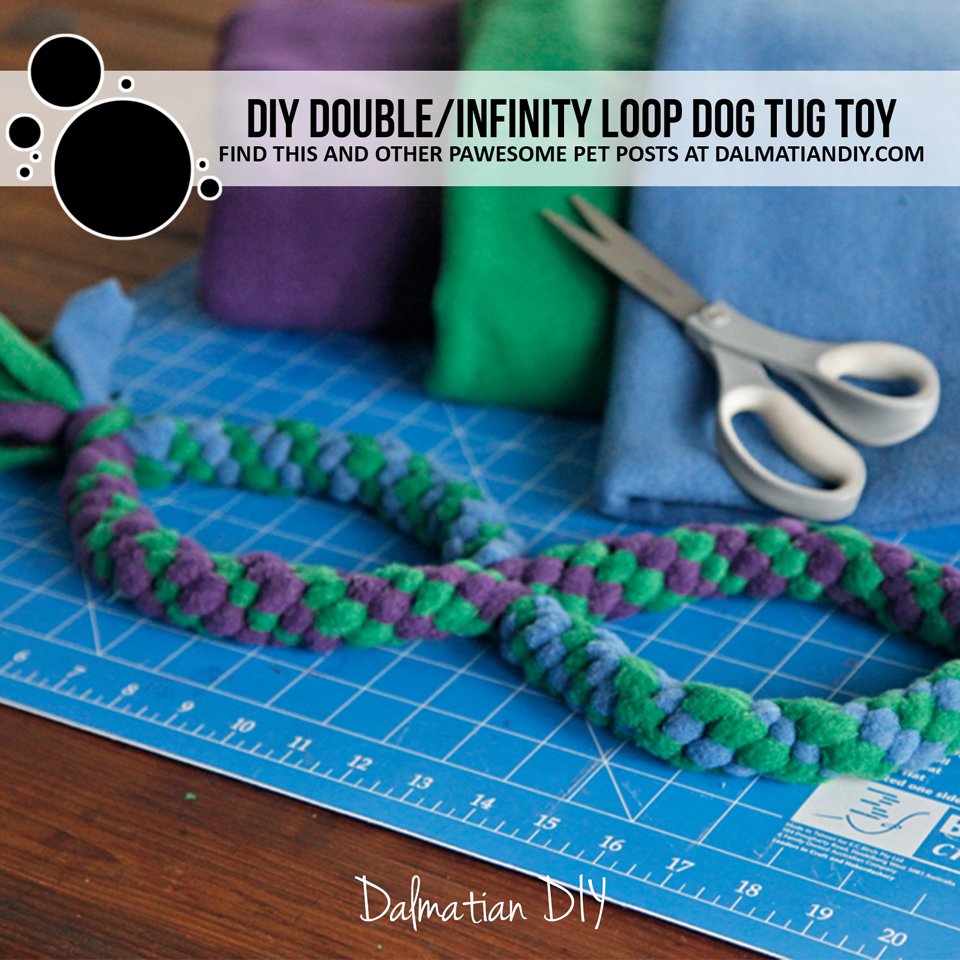