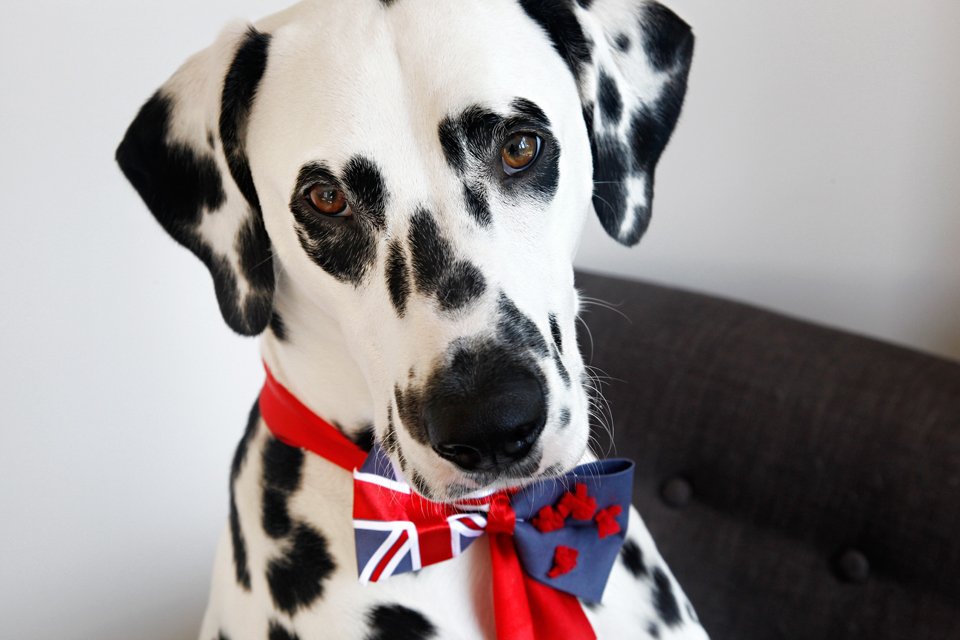 Feeling puptriotic? Check out our DIY New Zealand flag dog bow tie. It’s pawfect for showing the world that Humphrey is a proud New Zealander. It’s completely no-sew, too. We also created an Australian flag version so that our Aussie furfriends across the ditch wouldn’t feel left out. Here are all the DIY details on how the no-sew flag dog bow ties were made and decorated.

With Australia Day celebrations fast approaching, we were looking for Australia Day dog DIYs to share with our furfriends. However, we discovered that there weren’t many Aussie dog DIYs to share, so we created something ourselves. Of course, as proud little kiwis, Oli and Humphrey were not impressed to model the Australian flag. Haha! Good thing we made a New Zealand flag version, too. I created a no-sew DIY dog bow tie demo for each flag, so you can pick and choose to suit your own patriotic pups or use the DIY as inspiration for other flags.

Creating a no-sew dog bow tie is relatively simple, especially if you are using a ribbon tie attachment like these. For more ideas, check out our post on making no-sew DIY dog bows and bow ties. We also have no-sew DIY dog bandanas if you’d prefer making a bandana instead.

Making a No-Sew Flag Design on the Bow Tie

Creating the flag design is a little trickier, but totally doable. I’m using ribbon with hemming tape to create the union jack portion of my bow ties. The satin ribbon has a flag-like sheen. I used scraps of fleece to make my stars for the Southern Cross. I didn’t have any in my craft stash at the time these were made, but fabric paint would also be a great no-sew option for making the stars. Alternatively, you can use fabric markers or fabric paint for the whole design. Opaque paints, like the dimensional fabric paints used in our DIY ugly Christmas sweater bandana may give you better colour on the blue flag background than inks and markers.

These bow ties were made several years B.C. (Before Cricut). Custom iron-ons would also be an easy option for no-sew decorations instead of ribbons or paints. Even if you don’t have a computer controlled cutting machine, you can easily cut iron-on materials into strips for a flag and/or shapes for stars. I still love the silky ribbons, but would probably make little iron-on Southern Cross stars if I was making these bow ties today. See our Cricut pet crafts for other ideas and inspiration.

To make a similar no-sew flag bow tie, you will need:

To make bow ties as a no-sew craft:, you will need some sort of fusible webbing (e.g. iron-on hemming tape), an iron and ironing board, scissors, a piece of blue cotton, red and white satin ribbon, glue, and scrap fleece or felt in red (New Zealand) or white (Australia).  You may wish to use a cloth under and/or over to protect your board and/or iron from any stray fusible tape.

To keep things no-sew, the stars can be glued, but they can also be easily tacked in place with quick corresponding thread stitch. All fusible attachments can be sewn instead if you wish.

Preparing the bow tie base:

Finishing the body of the bow tie:

Both the Australian and New Zealand flags have a Southern Cross, but they are not red and white versions of the same. You can read all about the history of the New Zealand flag including the differences on the Ministry for Culture & Heritage website.

See other DIY options in the notes above on creating a flag design. You could easily iron on, stamp, or paint stars instead. You could also embroider them. For the latter, you may find it easier to sew before fusing the back. I think embroidered stars could look sensational on a special bow-tie or bandana, but then this wouldn’t be a quick no-sew craft either.

Options for Tying and Wearing the Flag Bow Ties

You can leave the ribbon ends as decorative elements on the bow or use them to as an easy tie-on method for attaching the bow to your dog’s collar. Alternatively, you can trim and tuck the ends, then secure the bow to the collar with elastic or another attachment. See our post on no–sew dog bows and bow-ties for other attachment ideas. My favourite sneaky trick for attaching a bow tie (or other embellishment) temporarily to a dog’s collar is to use sturdy hidden hair ties.  Humphrey posed for this post with ribbons, but only briefly and under supervision. Even with supervision, it’s better to attach embellishments to a breakaway collar or other safety release wearable. 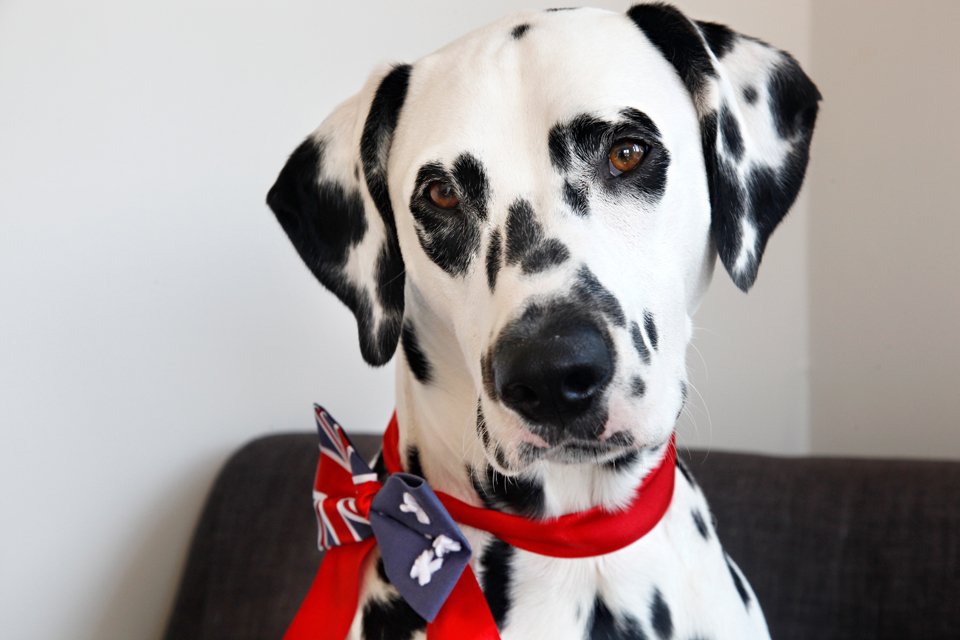 Looking stylish, indeed. However, good behaviour to go with the good looks is not guaranteed. Remember that accessories like this may not be suitable for all pets. When worn, they’re for special occasions with you present and supervising, just in case. Safety is always more important than style. Whatever your location, celebrations, or observations, we hope they’re doggone great. Don’t forget to share only dog-safe treats from your feast or make a some special treats for your patriotic pups. For our Aussie furfriends, if there are fireworks in your area, please ensure that your pets are safe and secure. 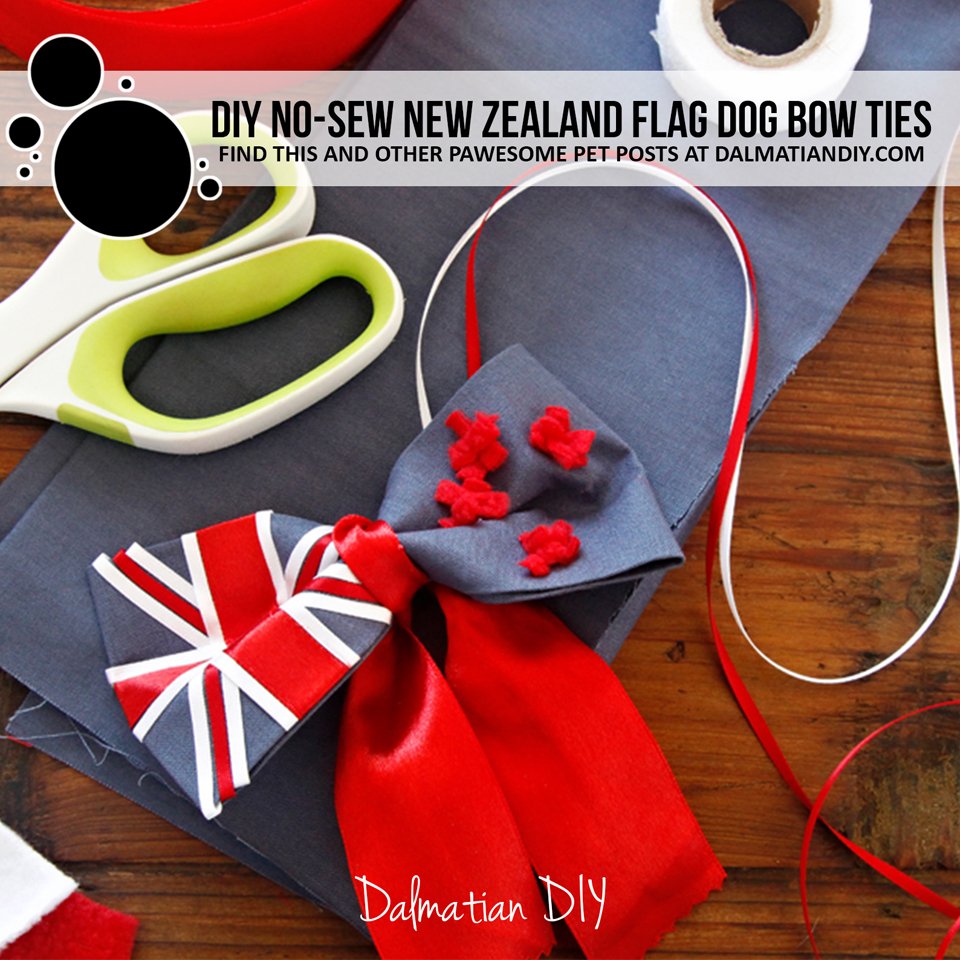