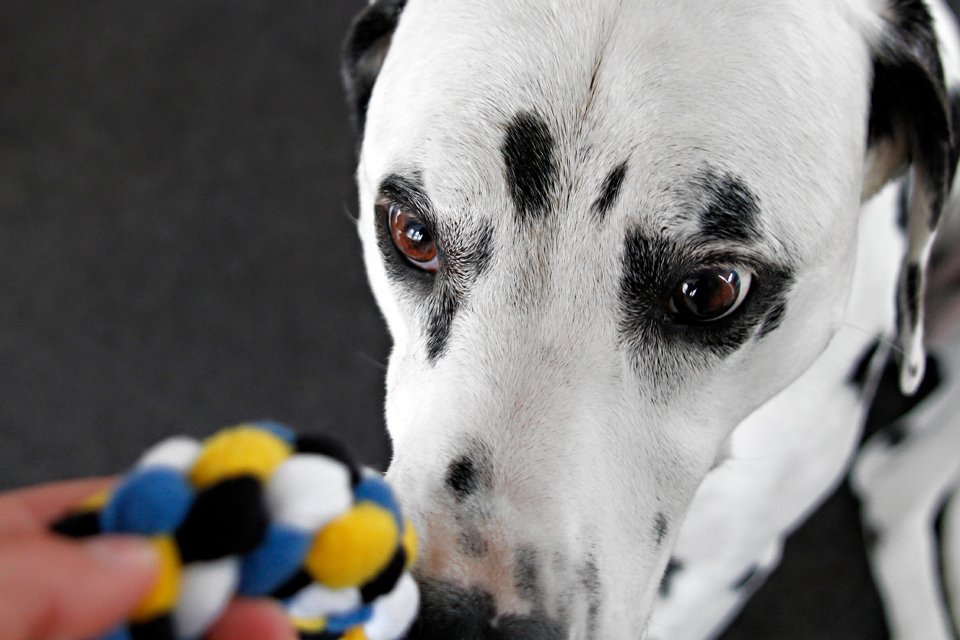 Contrary to popular myth, dogs aren’t colour blind. They just see colours, contrast, and more quite differently than people. Check out out our post about the differences between how dogs see things vs. how humans see things for details and examples.

Blue and yellow are the two true colours for a typical dog’s vision. To create a special high visibility dog toy, we combined those colours with high contrast white and black in a spiral tug for senior Oli and his young sidekick Humphrey. This combination is my new version of doggy “high vis” for colour and contrast. Curious? Check out the  side-by-side simulation with our high visibility dog toy below.

As noted in our dog vision post, our new knowledge won’t change most of the projects you see here on the blog. Many of our DIY dog toys are for special occasions, styled for a combination of dog fun with human preferences, especially holiday dog toys. The toys we make (and buy) are usually more about shape, texture, toughness, and often squeaky fun than colour. For toys where anything goes, we’ll definitely keep colour in mind though. We’ll think about how the dog toy colour plays against the backdrop of our carpets and flooring indoors or green grass outdoors. Blue is my new surprise favourite colour for most situations – it’s easy for us to see and still stands out for the dogs as well.

We haven’t shared a tug toy DIY here on the blog in quite some time. With Humphrey growing up and a little less fangy and Oli mellowing into senior dog play, our tug toys last a lot longer these days. Fleece tug toys are surprisingly tough and the toy box is well stocked. Some tugs are over a year old and still going strong, even with regular wild play and frequent washing.

This high visibility dog toy is a special Oli vision edition. It’s simply a blue, yellow, white, and black version of our standard simple spiral tug toy. I went for a four-colour spiral for the added visual impact of the speckled colours. As noted above, the blue and yellow were chosen based on the colours seen by dogs. The white and the black were chosen for added visual contrast.  Some or all of these dog-friendly colours could be easily adapted into any DIY tug design, or with other types of toys.

To create your own similar high visibility dog toy, you will need sturdy fray-free fabric and scissors. I like to use heavyweight polar fleece in making tugs. Fleece is sturdy (as fabrics go), has a nice touch of stretchiness when playing, doesn’t shed threads, and can be easily machine washed. To make a similar toy, you will need:

To weave a toy as shown, clean fabric is cut into 4 long narrow strips. You can scale the tug toy to suit your dog and your materials by altering the width and/or length of the fleece strips. I’ve made many different shapes and sizes over the years. Fortunately, when making a tug with fleece there is also no need to be too fussy about straight lines when cutting. Yay! Try to cut them in a similar width though to help keep your pattern looking nice and consistent. No need to worry about any accidentally wobbly cuts, though.

This high visibility dog toy was made using a diagonal corner-to-corner weaving method to create a speckled spiral tug. Detailed instructions as well as additional diagrams and step-by-step photos for this weaving method are available in our post on making spiral dog tug toys.

As noted above, the detailed instructions for weaving spiral tug toys are available in our archives. We also have lots of other fun tug toy ideas if you’d like to try a different weaving pattern or design. Helpful information is also available in our tug toy tips and troubleshooting posts: 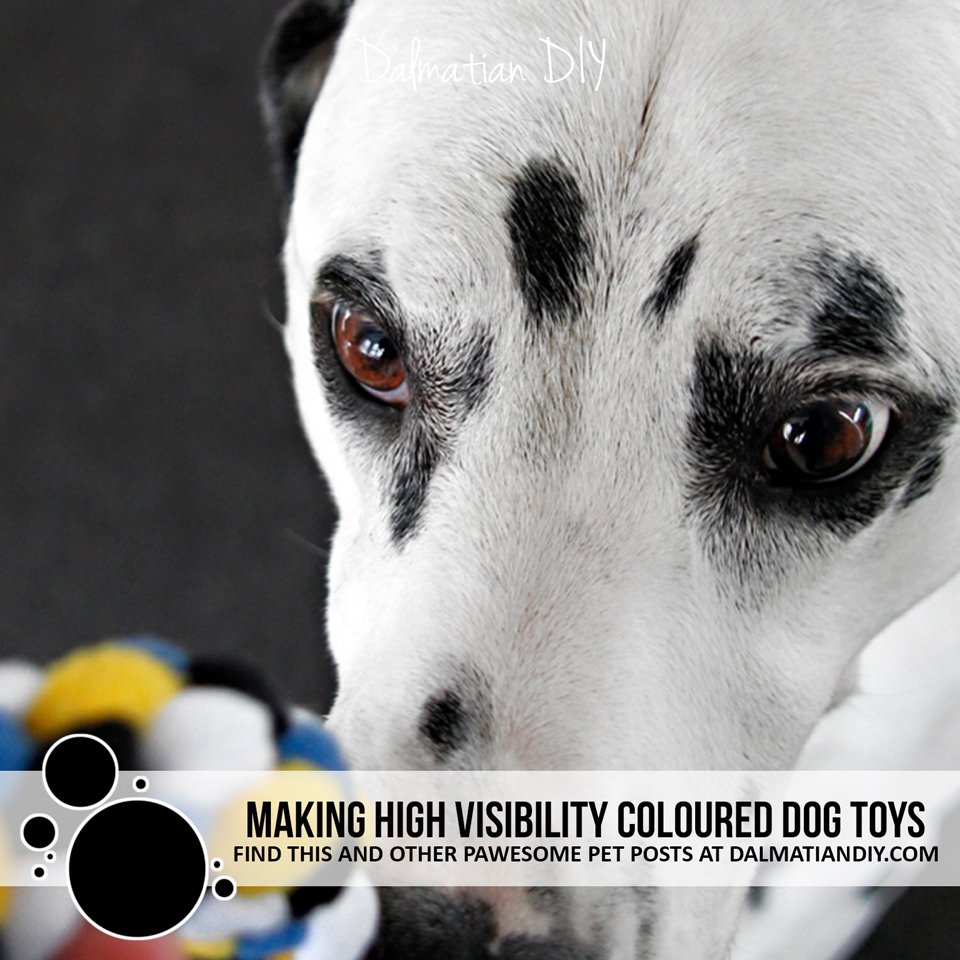