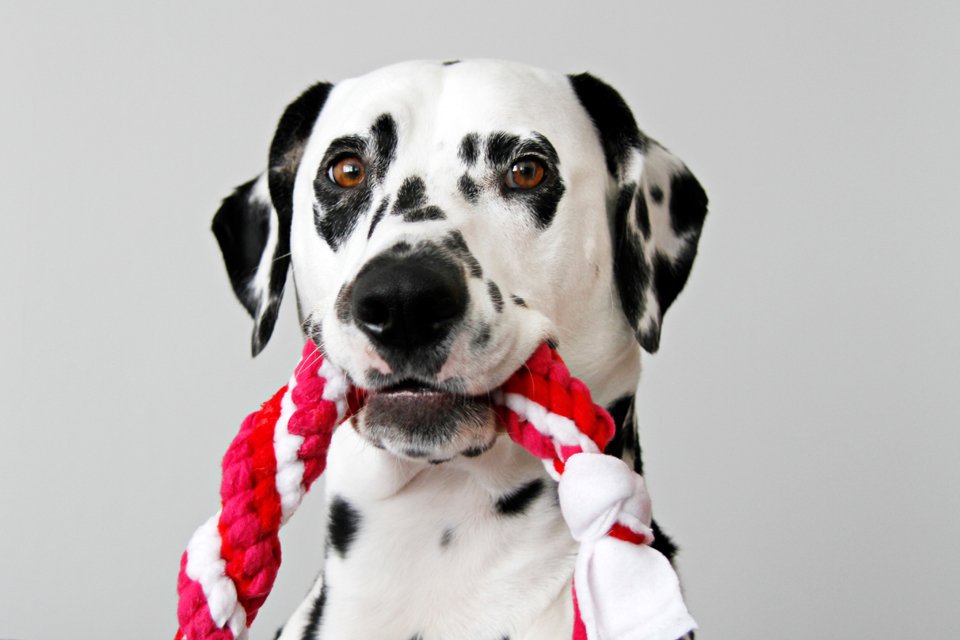 The double spiral is one of my favourite DIY dog tug toy weaving techniques. It creates a beautiful, thick, and sturdy tug. Once you’ve learned the basic four-strand spiral, adding another set of strands is a deceptively easy new pattern and it creates a great looking tug toy. Here’s how to make a DIY twisted double spiral dog tug toy, with full instructions, weaving diagrams, and step-by-step photos.

If you’re just getting started with making tugs, I’d recommend starting with a single spiral (corner-to-corner diagonal spiral tug toy weaving method) and then moving up to the twisted double spiral. The single spiral using the same weaving method, but with one pair of horizontals. It’s easier to keep track of what’s moving where while you learn the weave than diving straight into a double.

The twisted double weave starts with six strands instead of four. Not only does this create a pretty pattern in our weave, but the extra strands help to create a sturdier tug toy, too. Like the simple spiral, it has two verticals, but it has two sets of two horizontals. Since the two sets of horizontals shared the verticals, the woven spirals conjoin and twist around each other as the tug is knotted, creating the twisted double spiral appearance. It looks tricky, but the twist just happens all by itself. The tug shapes itself into a twisted spiral like magic as long as you follow the weaving pattern consistently. Here’s how to make it! 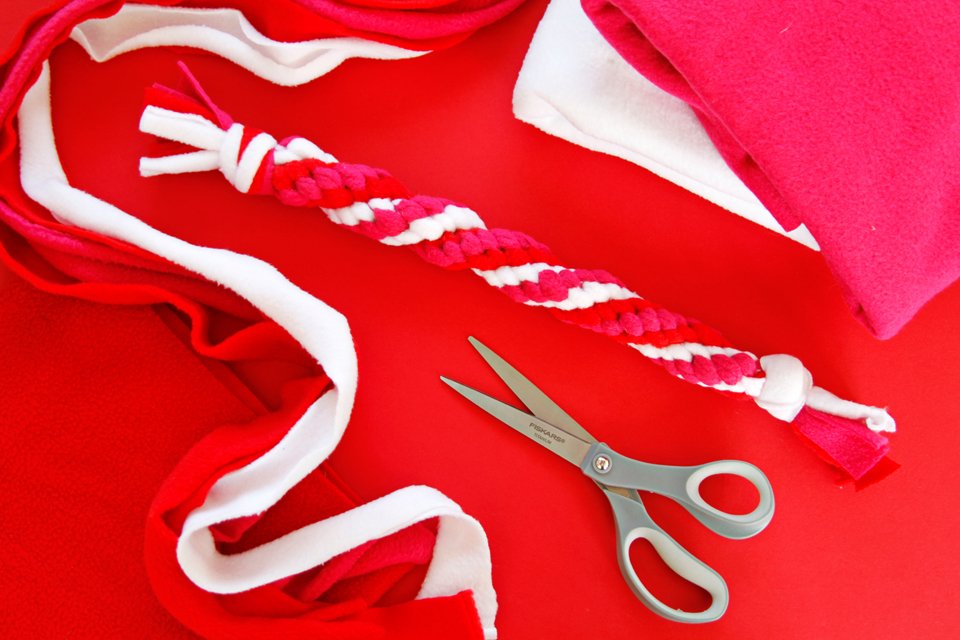 To make a similar twisted double spiral dog tug toy, you will need:

To weave a twisted double spiral dog tug toy as shown, clean fabric is cut into 6 long narrow strips.  You can scale the toy to suit your dog and your materials by altering the width and/or length of the fleece strips. I’ve made many different shapes and sizes over the years.  Fortunately, when making a tug with fleece there is also no need to be too fussy about straight lines when cutting. Yay!

For the true appearance of the twisted double spiral to really pop in the finished tug toy, colour is important. The six strands need to be in pairs of two different colours: two verticals (will appear in both spirals) and two sets of two horizontals. Since this toy was made for Valentine’s Day, I used pink, white, and red. The horizontals (red and white in my example) are the same length, but the verticals (pink in my example) should be roughly one and a half times that length. All strands are equal width.

The difference between the pink and the red in this twisted double spiral Valentine’s Day tug can be difficult for some of our readers to see clearly in photos. When this post was updated for transition to the new blog, additional photos were added at the end of the post showing a similar DIY twisted double spiral dog tug toy made using blue, pink, and green so you can see it in another colour in case that’s helpful.

Preparing the strands for weaving:

You can arrange your strands and jump straight into the spiral weave, but you may find it easier to tie a starting layer first. One option is a single layer with two square box knots side-by-side next to each other, both tied using the same vertical strands. This will create the tidy starting checker board strand configuration for your spiral weaving as shown in the diagram below. It’s really not that different than starting off with the diagonals, but many weavers find the straight set up easier to arrange from the jumbled strands at the end knot. Once you get into weaving, the first layer doesn’t really affect the appearance anyway, so whatever works for you is a-ok with me (and the dogs).

Weaving the body of the twisted double spiral tug toy:

The remainder of the twisted double spiral dog tug toy is woven using two spiral weave knots adjoining each other, tied using the same vertical strands. Spirals are woven on a diagonal to opposing corners instead of straight like a basic square box knot. If your starting configuration is top strand right (as shown in my example) weave as follows. If your starting configuration position is top strand left, it’s simply the opposite sequence.

Repeat the same sequence to weave the remainder of tug. It’s way easier to do this (and any fleece toy weaving) with the working end secured. I like to nip mine between my knees. No special fussing required with securing the end and it works great!  This allows me to freely flip the strands to the front, back over a shoulder, and from side to side. If unsecured, it’s hard to neatly weave a pattern sequence. Movements or mix-ups can create pattern problems in the appearance of your finished tugs.

As always, don’t leave yourself short on material for tying off the end knot of your tug. I’m using a simple overhand knot.  You can also use an alternative end knotting technique. Whatever your style, I recommend matching your starting knot technique for a consistent look. 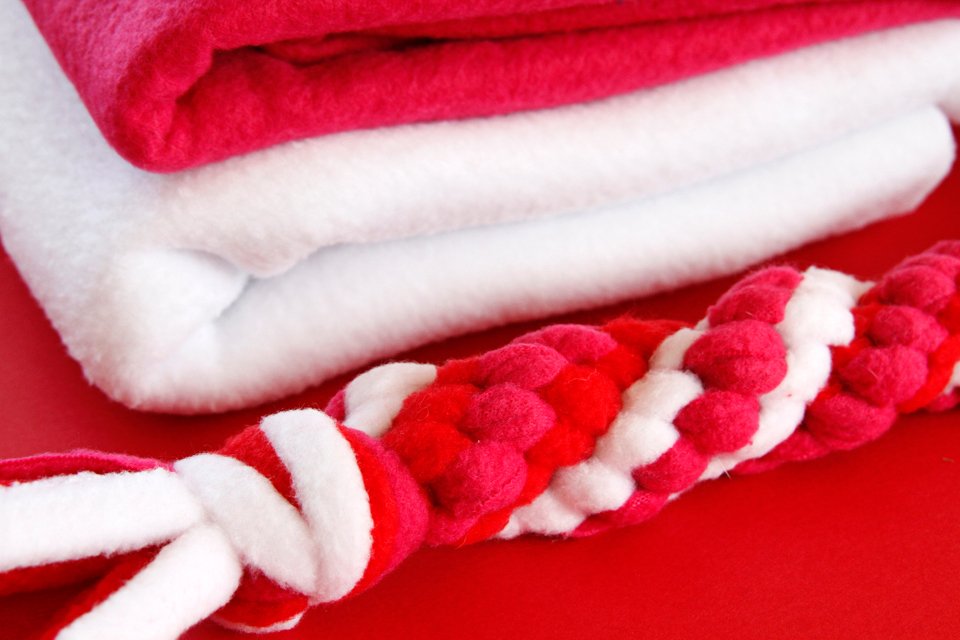 As noted above, the pink and red in this toy may be difficult to distinguish in photos for some readers depending on their vision and/or viewing devices. Here are a few photos of the same style of tug toy woven with other colours in case the added visuals are helpful. You can also see completed examples of similar tugs in our St. Patrick’s Day tug toys and Hanukkah tug toy idea posts. 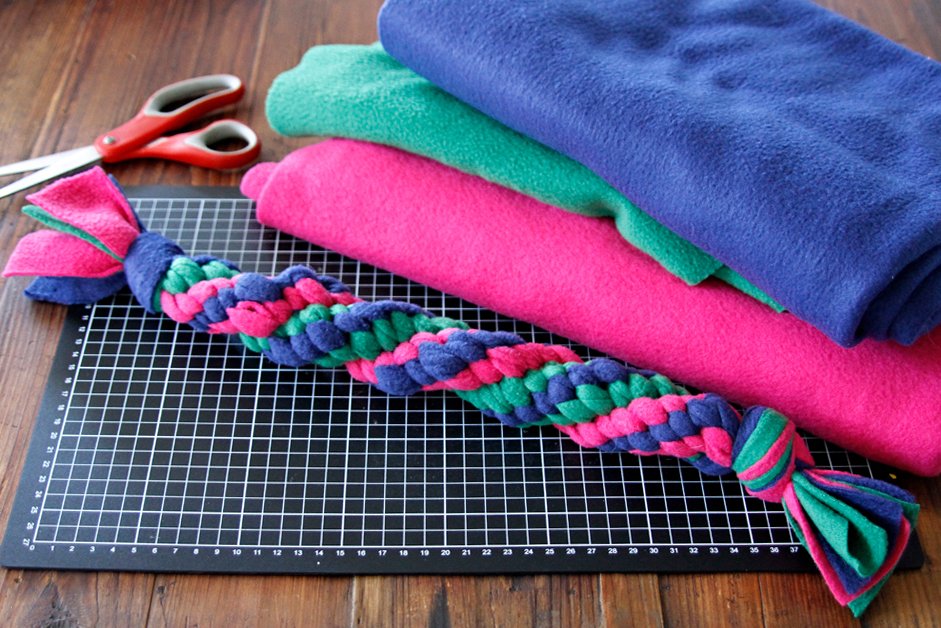 Safety first, furfriends! Remember, no matter what a toy is made of or how it’s made, toys are meant for supervised interactive play. Know your dog before giving him or her any new toy. Some dogs try to eat toys or parts (whether bought or handmade) and that’s doggone dangerous. Toys are for playing, and playtime is always safer (and way more fun!) with you involved. You can read more in our dog toy safety post, including tips and helpful links for safer playtime. Have fun and play safe! 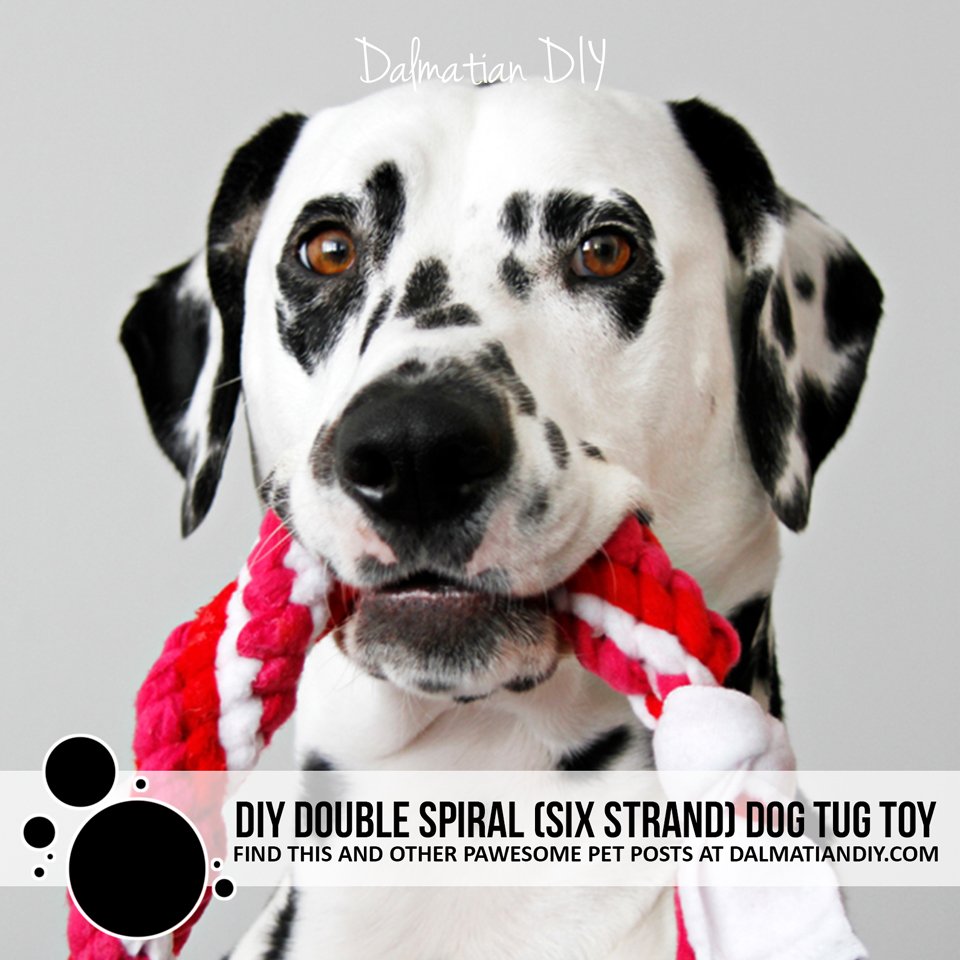