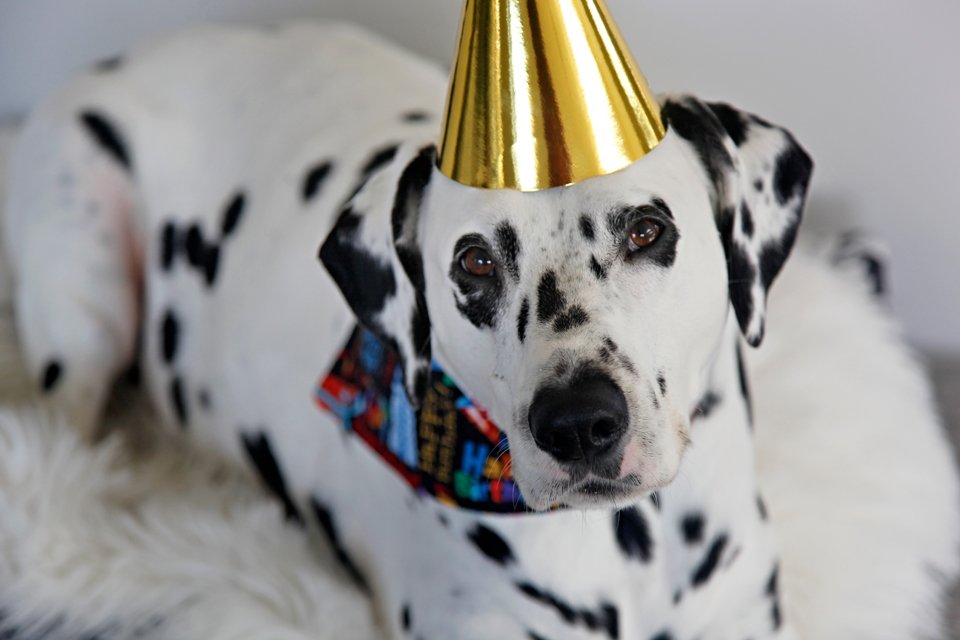 Happy 8th birthday to Humphrey! What a day! Such treats! What cake! So much fun! Now we have a very tired little boy resting, and I’m playing catch up on his party pics. Come on in and take a peek behind the scenes for our furfamily celebration of Humphrey’s 8th birthday.

It was a frosty start to the day for Humphrey’s birthday this year. We had a family Sunday morning pancake breakfast before heading out for a birthday pack walk. Then it was time for extreme scent-fest, birthday edition. Humphrey had the delight of watching his Dad prepare him a fresh batch of beef jerky dog treats for the dehydrator, with the most loving puppy dog eyes ever too, I might add. Then we packed up a batch of his homemade breakfasts. Drool factor on max! And we hadn’t even started the birthday baking yet. What a day, indeed! 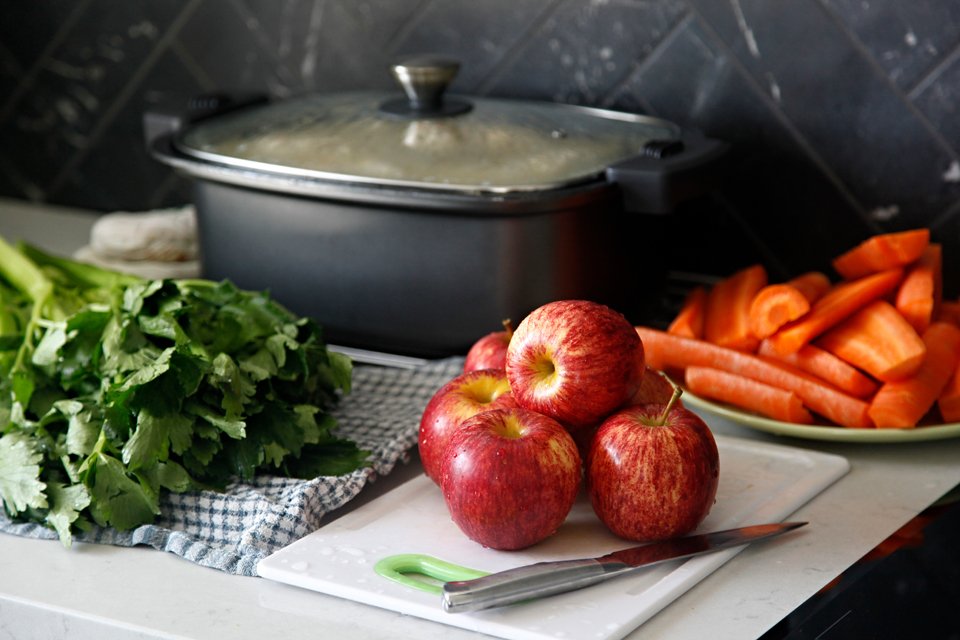 Humphrey’s birthday cake this year was a layered lamb and carrot meatloaf, topped with mashed potato and garnished with chicken and jerky. I’ll be sharing the recipe in an upcoming posts here on the blog, so stay tuned for all the doggone delicious details. 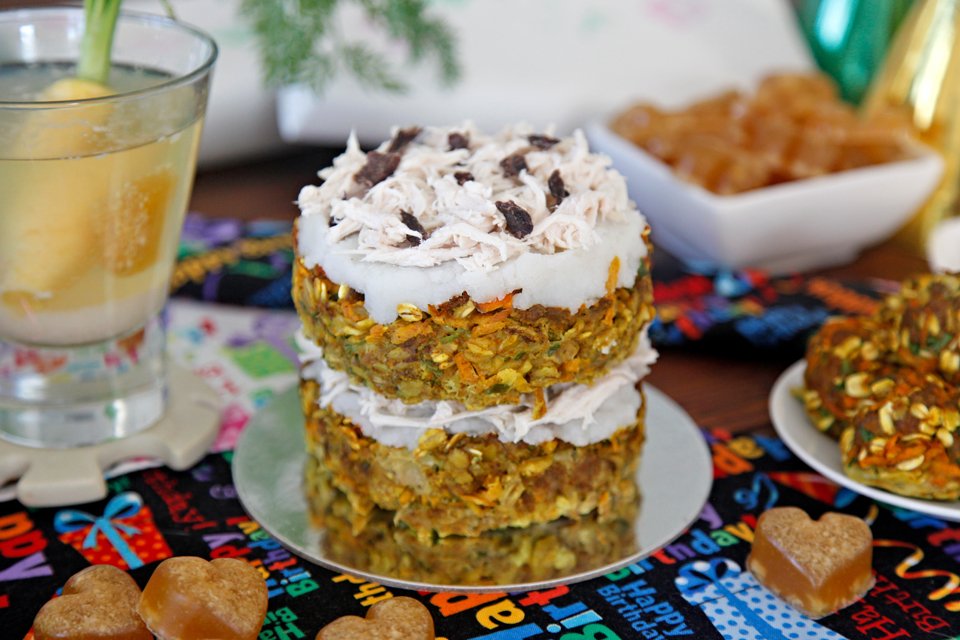 The birthday boy got a slice of cake later in the day on his birthday, as the first course of his dinner. He had a treat and his birthday mocktail after our main photoshoot, but had to wait for dinner before his mini cake smash. We had to pace ourselves on such a big day and spread out both the fun and the snacks. Haha! We’ve carried on the mocktail tradition since Oli’s birthday quarantinis. Cheers to you, old lad!  This year’s was a simple diluted chicken stock from breakfast prep, garnished with a baby carrot (Humphrey’s favourite), fresh from the garden. 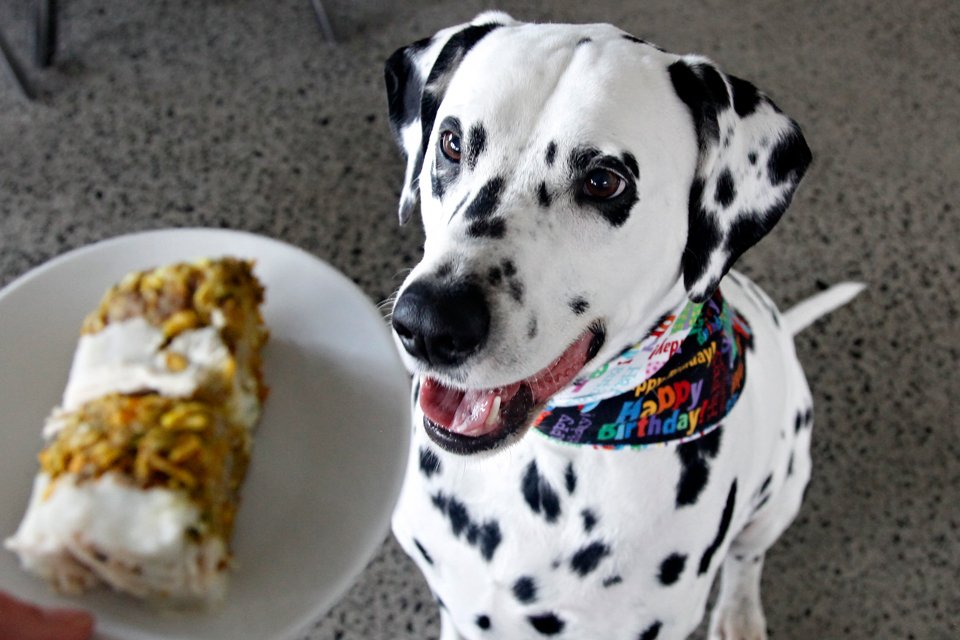 Humphrey was already having a very big birthday in the kitchen with his Dad making our usual batch of jerky and breakfast prep. We do both of these things on the regular, and it was just by chance that both activities were due for their next batches on Humphrey’s birthday weekend.  We kept it simple this birthday with just the cake, although I did make the recipe big enough to make a few bonus meatball dog treats. And, of course, we always have a batch of homemade gelatin gummy dog treats of some sort on hand for healthy fridge snacks. 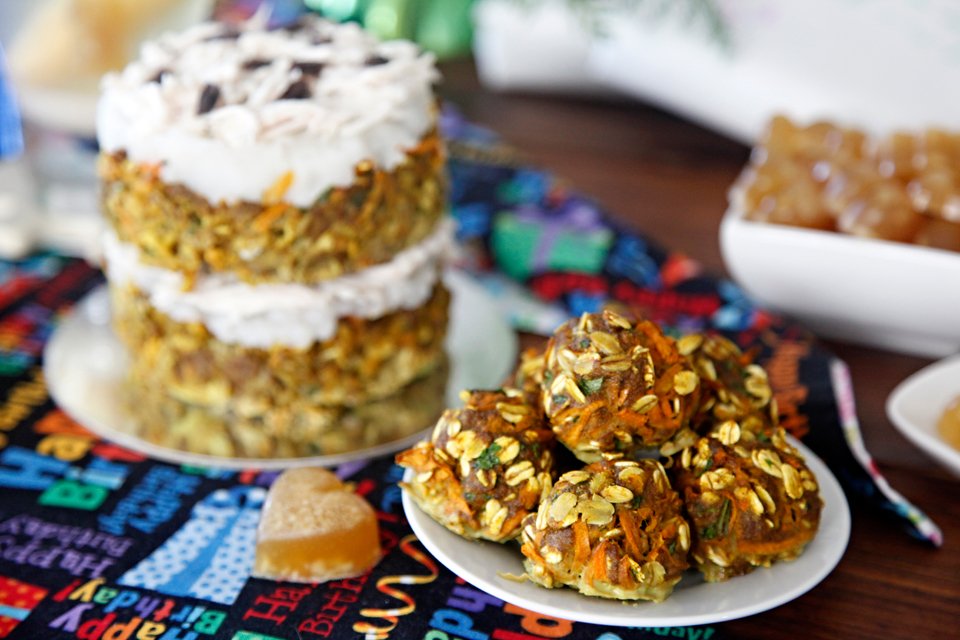 I made Humphrey a squeaky stuffed birthday cake dog toy, but it didn’t come out quite as planned. The decorations were great (as was the squeaky fun) but even with my sturdy dog-toy fabric it was too puffy after stuffing and kind of lost its wedge shape. Ah well. Not everything we try in our crazy blog dog world comes out right. But as I often say to our readers, the dogs aren’t going to judge on looks, just fun. Humphrey was circling like a shark while I finished the sewing and has been squeaking up a storm with his new prize. He’d probably argue it came out even better this way since he didn’t have to wait until after party pictures were taken and got his toy a few days early. Haha!

I made a few treat shaker boxes for Humphrey to rip and recycle. I used the cutlery boxes from our grocery store’s current giveaway, decorated with butchers paper and our homemade custom stamps. Humphrey loves helping with the recycling, but a few rattling biscuits in a box is extra irresistible. Humphrey’s Dad had some new storebought toys tucked away for his birthday in the linen cupboard, too. Lucky lad. 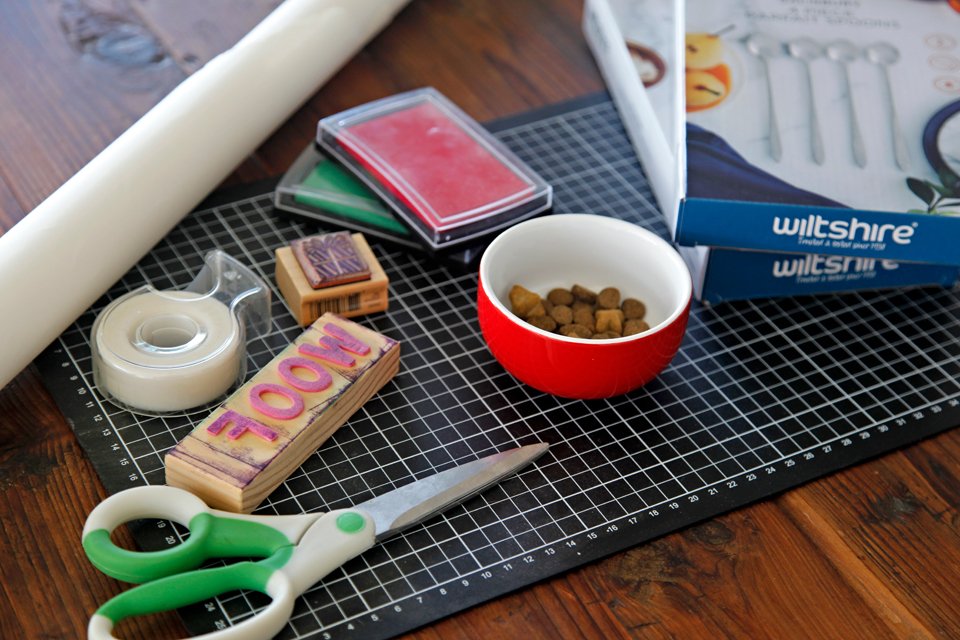 Thanks for all of the love you’ve shared with us since we started Dalmatian DIY, and for being part of Humphrey’s blog dog world. Drop by our on social media to wish Humphrey happy birthday, and I’ll read him your messages. Sorry we can’t share the snacks with you other than in photos, although we did invite Humphrey’s pal Cooper over for leftovers after this morning’s walk. Love and licks from our furfamily to yours! 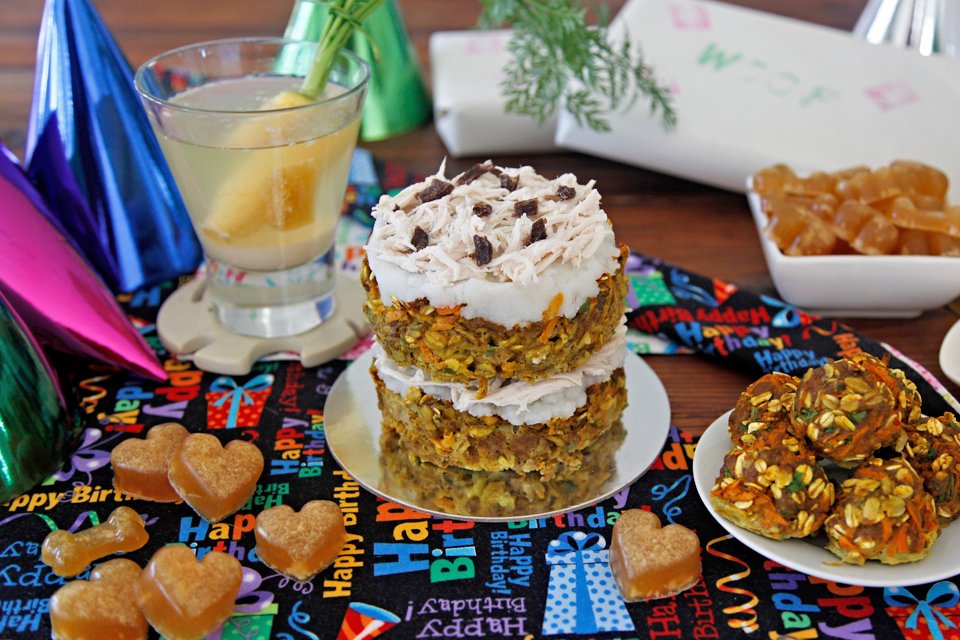 Looking for more celebration fun? Explore our milestone posts to grow up with the dogs and our blog over the years. You can also find all of our birthday-related content under the dog birthday party post category or explore the related topics below. Woofs! 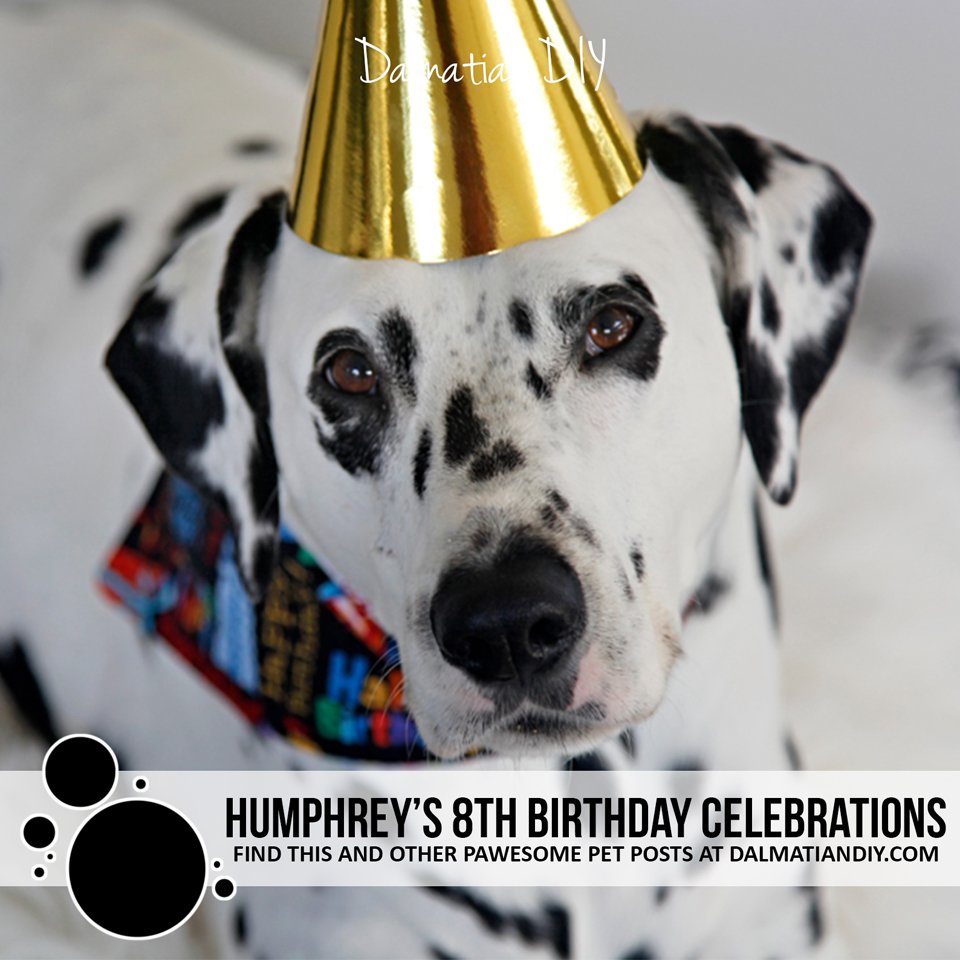