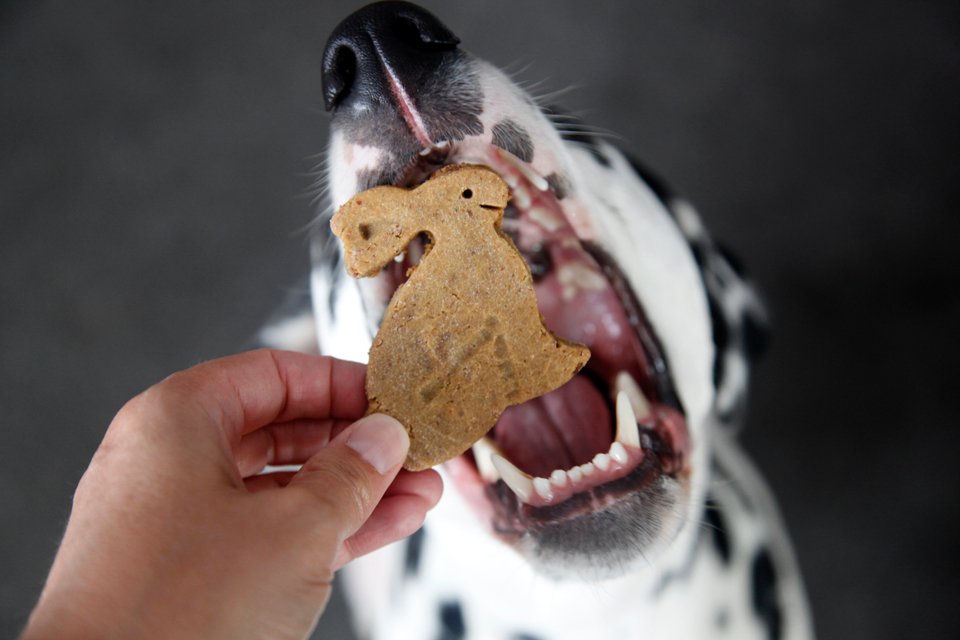 Mmmm…bacon bunnies! These homemade Easter dog treats combine the doggone irresistible scent and taste of bacon with yummy peanut butter and blackstrap molasses to make naturally brown bunnies.  The Easter dog treat tags and labels will be shared next week as our final pre-Easter post this year. Woofs! Hope you have a pawesome Easter, furfreinds!

The dough used in these treats are based upon our peanut butter and molasses Christmas dog treat recipe. It’s easy and the boys seem to love it, plus colour is great for a non-carob alternative for making “chocolate” brown bunnies. Of course, any roll and cut dough your pup likes would work pawfectly instead. You can check out our archives for other roll and cut dog treat recipe ideas, including carob dog treat ideas if you’d prefer “chocolate” bunnies.  Remember, in terms of dog-friendly cooking, carob is hands-down the way to go! Chocolate contains a compound called theobromine which is toxic to dogs. It can also contain other doggy no-nos like caffeine, sugars, or sweeteners. Always keep human treats out of reach and be very careful with any Easter eggs hunting and children’s baskets. 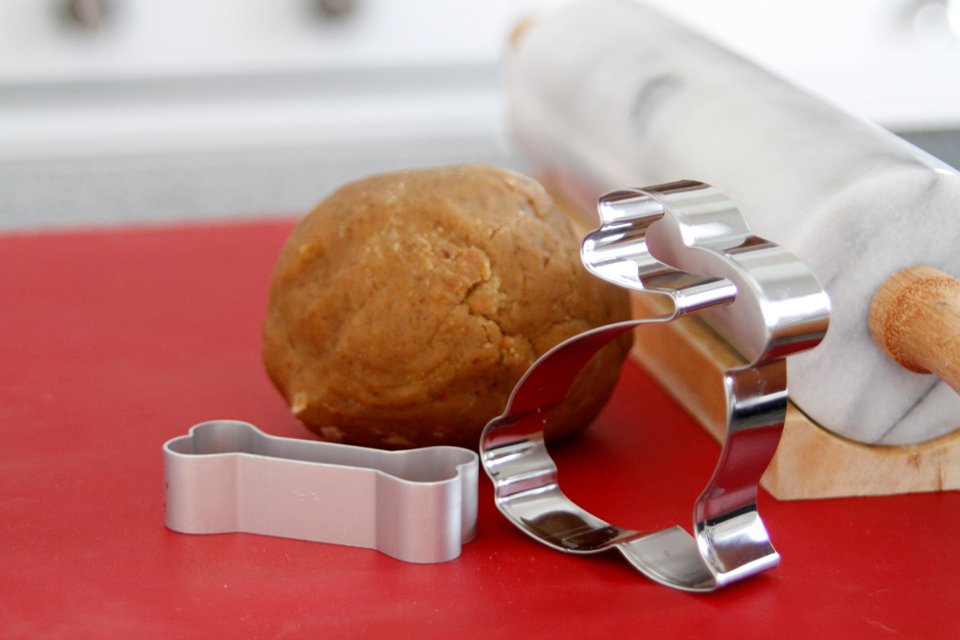 As noted above, this recipe was adapted from our peanut butter and molasses Christmas dog treat dough recipe. Making bunnies and bones is part of the Easter fun, but the dogs won’t mind if you take a shortcut instead. Roll and cut doughs can be used to make hand formed treats, pressed into a pan and cut to size, formed as treat bars, and more. See our simple shortcuts for making baked dog treats for ideas.

The Christmas treat recipe includes the option of a sprinkle of Ceylon cinnamon and/or ground ginger. I opted to leave them out here as there are lots of other yummy scents and flavours in the mix, but you can add them in if you’d like. They’ll add an extra dose of subtlety spicy hot-cross bun smell to the mixture, too. Mmmm…. Similarly, you can swap the bacon for another very finely chopped cooked cooled dry meat or leave it out. Easy peasy! Keep the chunks as fine as possible though. Chunky dough can be hard to roll and cut cleanly.  Chunky treats may also be more prone to cracking and breaking. 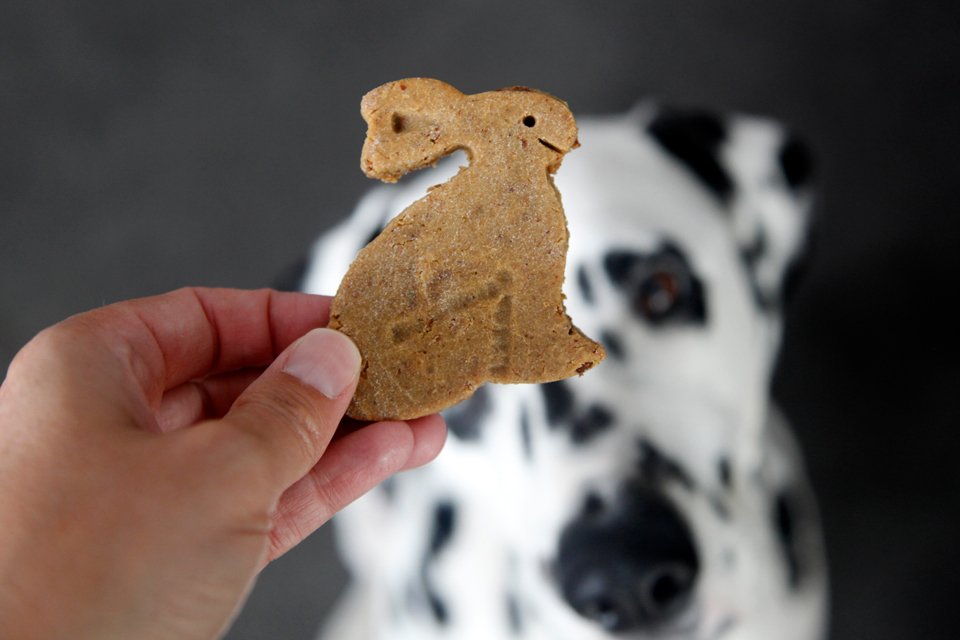 Ahhh. The age old Easter bunny dilemma.  The bunnies were pretty big, so I only made a few as special treats and the rest of the dough I used for tasty bones. I thought my bunnies could use a little extra style, so I used the side of a chopstick to indent the ears, outline the seated legs and cut a mouth, skewered an eye, and pressed a little indent to define the tail.

If I was making these again, I would try to process the bacon into a finer meal with the food processor,  as I have with other treats recently. It works much better for roll-and-cut dough. As you can see in the pictures, the bacon chunks in my dough made it tricky to cut these shapes cleanly. I think it also contributes to surface crackling due to the consistency variations between dough and chunks during cutting, baking, and dehydrating. Still just as tasty though! Zero complaints from the taste testers for sure. 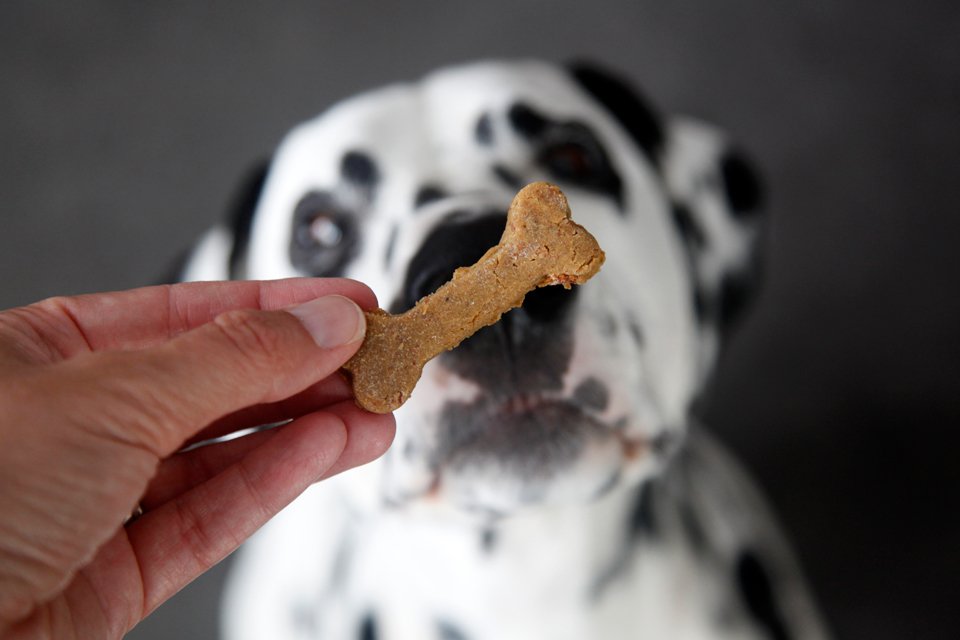 Hungry for more tasty treats?  There are all sorts of homemade dog treat ideas in our blog archives. You can also use the category and tag labels above/ below this post to find other recipes that might be of interest or use our internal search tools to find something specific. Remember, treats (bought or homemade) are for spoiling your pup in moderation. We share ideas from treats that we’ve made ourselves for our pets, but different animals have different preferences (likes/dislikes), just like people. Some pets may have special dietary requirements and/or food allergies/intolerances. If you are ever in doubt or have questions about what’s suitable for your pet, have a chat with your trusted vet. 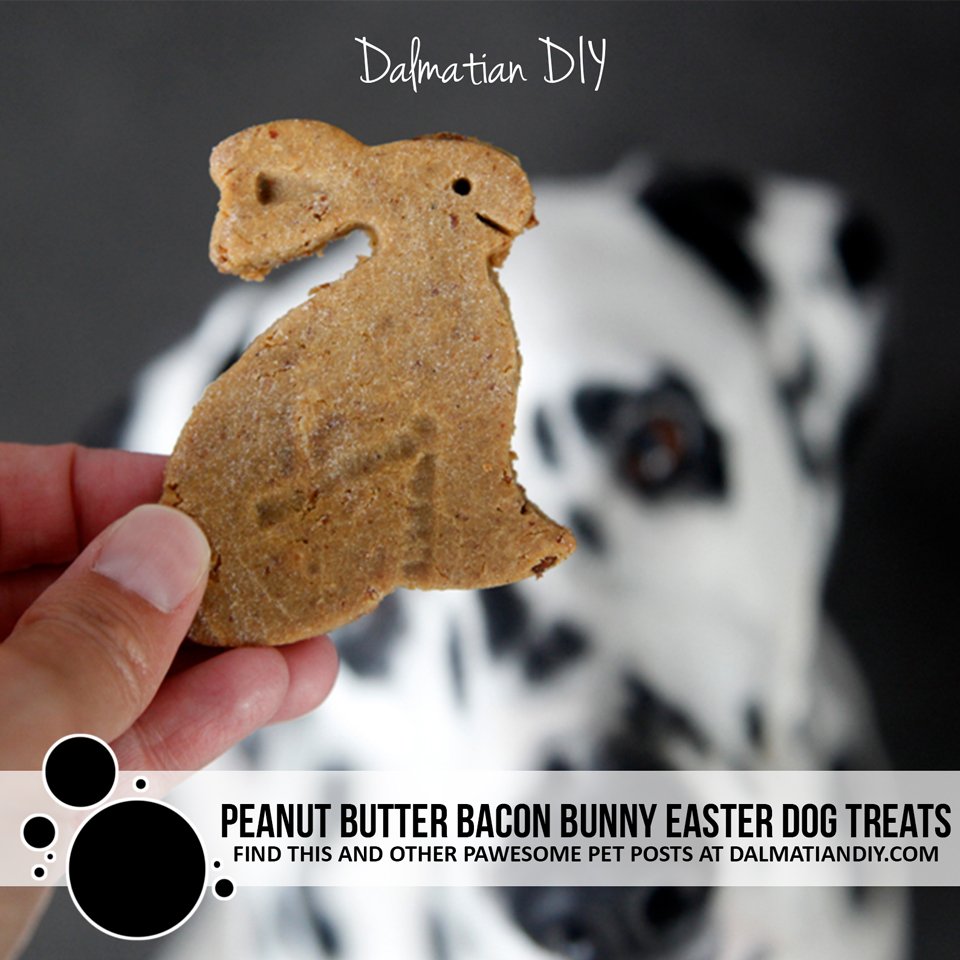