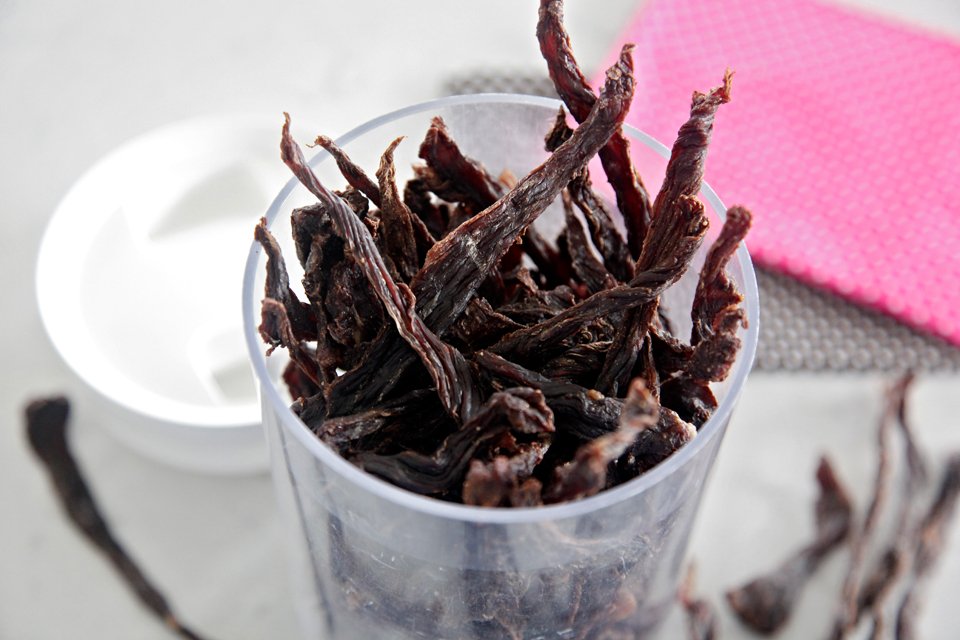 Jerky dog treats are a favourite of Humphrey and his dog pals. These ginger dry rub beef jerky treats use an optional dog-friendly spice mixture as a dry rub marinade. We often make plain unseasoned jerky treats, but today we’re spicing it up a little.  Let’s take a look at dry rubs vs. marinades and how you can easily customise your own special dry rub mixture for making jerky dogs treats.

Jerky is one of the easiest and healthiest treats that I make for Humphrey. Straight up plain and simple jerky (usually beef) is our go-to jerky treat. But, variety is the spice of life and sometimes we like to mix it up with different scents and flavours.  In our experience, light marinades or wet rubs with dog-friendly ingredients don’t make much texture difference to the jerky (with the exception of acid marinades for fish jerky).  Marinades can tenderise, but the primary function of short term marinating or seasoning is to add scent and/or flavour.

Anytime you see a marinade or a rub used with a jerky treat here on the blog, it’s optional. For the basics on plain simple and doggone delicious jerky, see our post on how to make easy DIY beef jerky treats for dogs.

What’s the Difference Between and Marinade and a Dry Rub?

Most marinades are wet mixtures, using water, juices, oils or other liquids with or without extra seasonings. Dry rubs are just what they sound like, and use only the dry herbs, spices, and other seasonings for scent, tastes, and (in some cases) texture.  Which is better? It all depends on what you’re cooking and your personal preferences, as well as the favourings. Some seasonings are naturally wet.

There’s no need to try to tenderise meat for jerky dog treats and we’re not trying to create a juicy cooked meat like grilling or roasting, so extra liquid is just extra liquid that needs to be drained away before spreading the meat onto drying trays or dried during dehydration.  This was what let me to start playing with rubs instead of marinades when making jerky dog treats.

When I chop meat for making jerky it usually has enough natural wetness that “marinating” with a dry rub instead of a liquid marinade works great.  Unlike a dry rub for grilling or cooking human foods which is usually applied shortly before cooking, I like to let the meat rest with the rub for a while and infuse before transferring the meat to the dehydrator. It acts like a marinade, but requires less prep and results in less juicy mess for dehydrating. Win win.

Anything dog-safe that suits your pup’s palette could be an option for creating your own jerky marinade or rub, but we do have a few words of caution.  For dehydrated treats, it’s best to avoid anything oily since that’s counterproductive to our goal of drying away the moisture.  Anything that leaves a sticky residue might not be to your liking either if, like me, you often pack pocket bags of dog treats for walks and other adventures.  Similarly, de careful with ingredients that might stain, like turmeric. Dog-safe dry seasonings are handy options for seasoning marinades or mixing rubs, but remember that anything chunky or flaky might not stay stuck in place after drying. 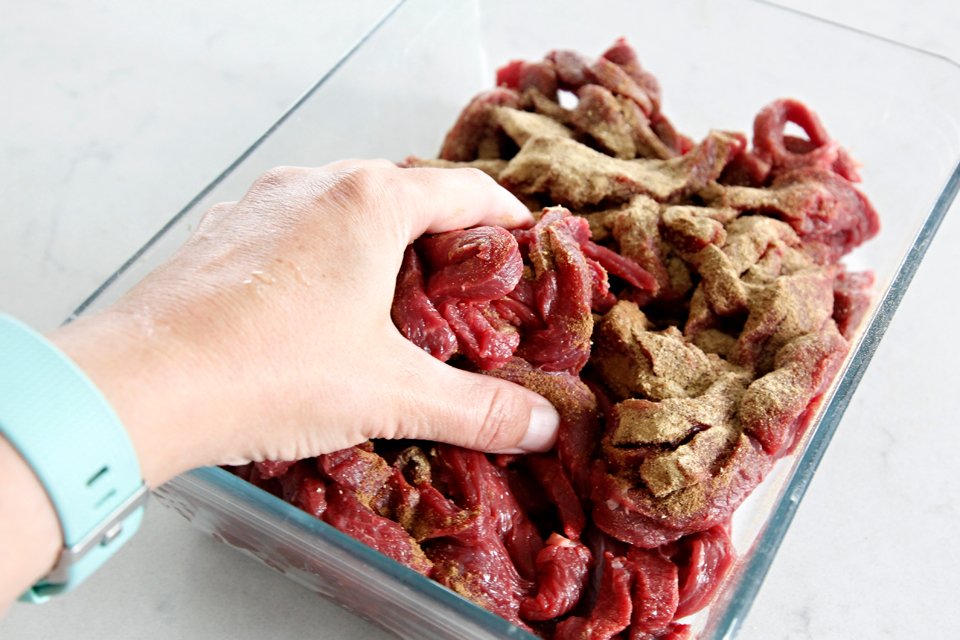 This isn’t really a recipe, since you can adjust the volumes and/or amount of any ingredient to better suit your dog or personal preferences. It’s more of a inspiration on how you can combine some doggone delicious scents and flavours to create a simple and easy dry rub for making special seasoned jerky dog treats. See the selection notes above for ideas, and there are more tips at the end of this post.

Optional Dry Rub: The quantities below are indicative only, based upon the pictured batch of ginger dry rub beef jerky treats.  You can easily adjust the quantities to suit your beef volume and personal preferences (and dog preferences).  The calibrated eyeball is a-ok for measuring dry rub ingredients. Don’t season too heavily, though. This is about adding some hints of scent and flavour, not overwhelming it. Dogs are very happy with tasty beef jerky plain, too. Let that meaty goodness keep its starring role.

If pre-heating (see note below), do this after applying the rub and before dehydrating.

I use a food dehydrator (affiliate link) for making jerky treats. Mine is a pretty basic model, but it’s been working great for years. If you don’t have a dehydrator. you can use your oven to make jerky instead. If you don’t have a dehydrator, you can place your prepared meat on a wire rack over a lined baking tray and then use the oven to mimic the function of a dehydrator. Note that it’s recommended to pre-heat meats to ~75C then dehydrate at ~60C. Refer to the safety information and links below.

If your dehydrator has a meat/fish setting, the jerky should be ready to serve once the dehydration is complete. However, to be extra safety conscious, you can use pre-heating and/or post-heating as added precautions. You can read more about jerky safety via the FSIS. 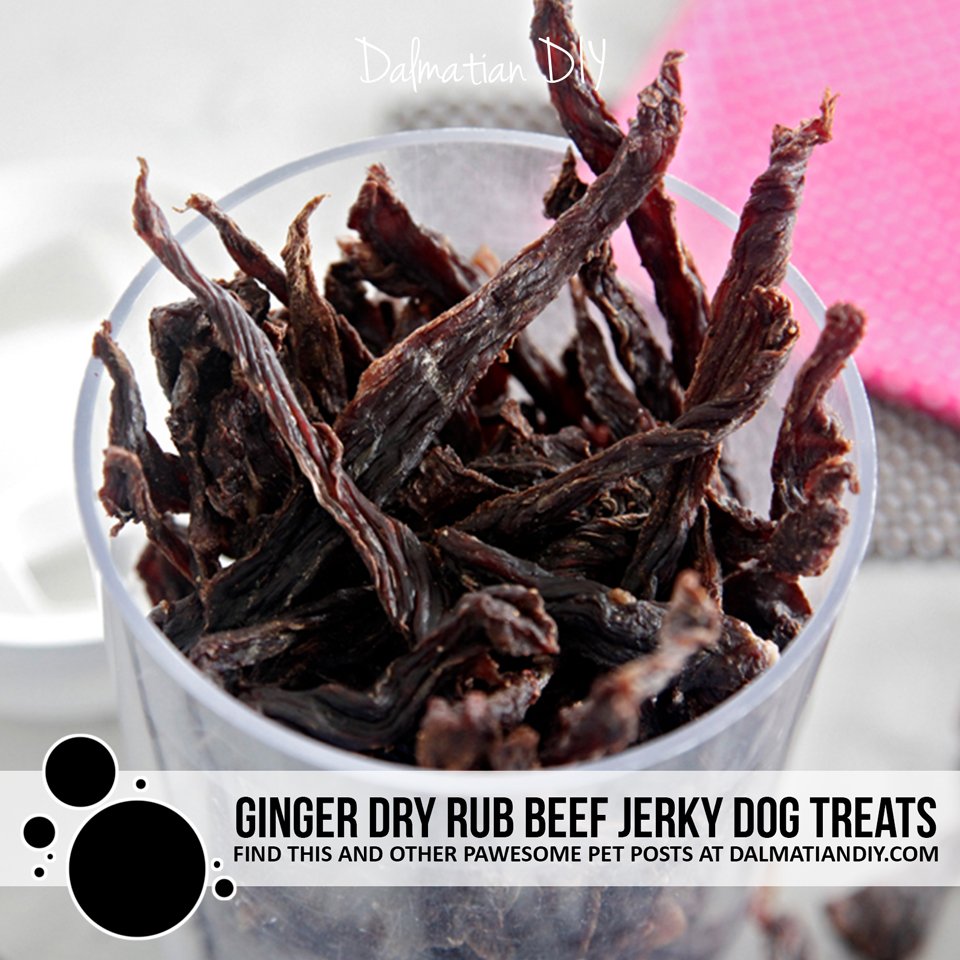 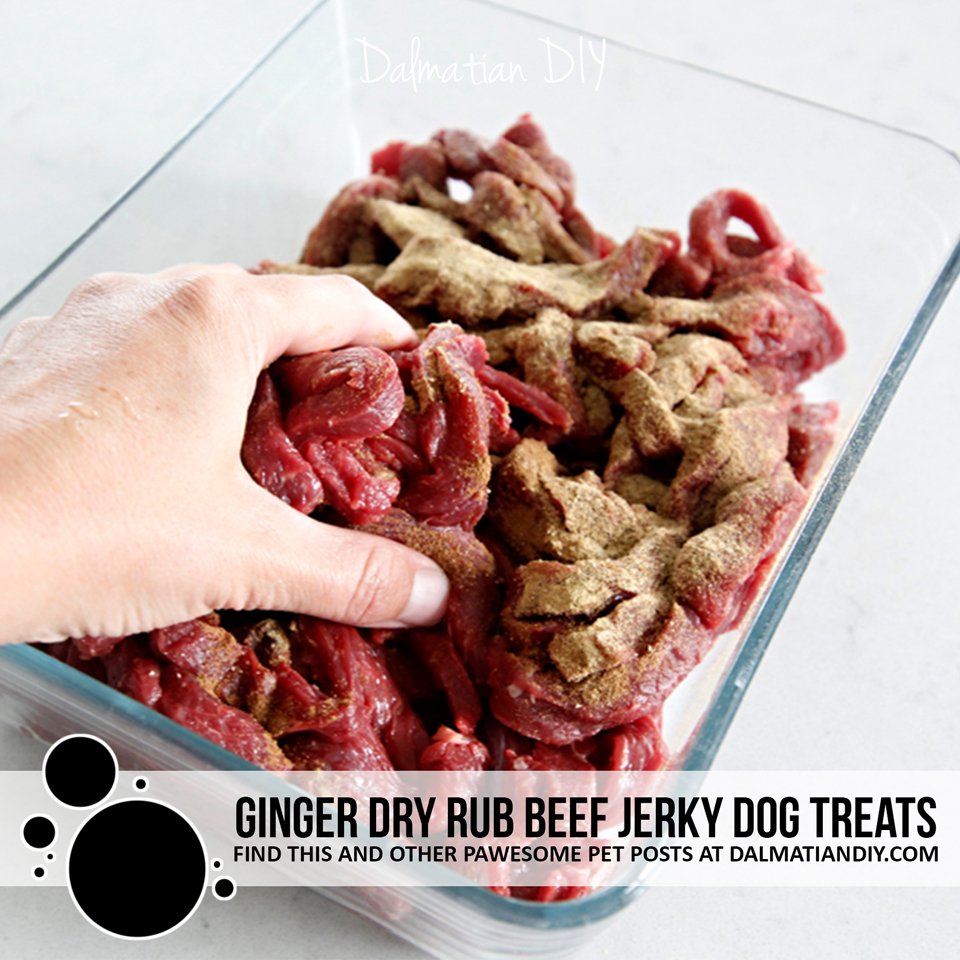