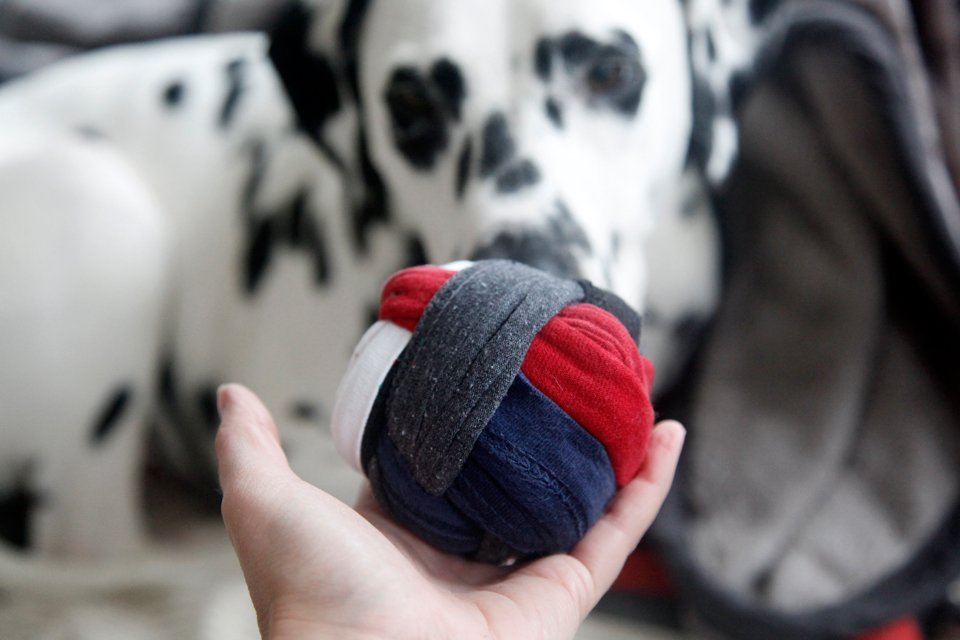 Finally! A doggone great use for recycling scrap t-shirt hems! Check out our DIY recycled t-shirt hem woven dog toys using these tough off cuts from other upcycling projects. When I first started making dog toys, I tried a few toys with t-shirt fabric and was unimpressed at how rapidly my wild beasts darling dogs ripped them to shreds.  The material might be fine for gentler play or smaller dogs, but t-shirt toys simply didn’t last long enough to be worth the effort.  Until I discovered the hidden potential of the unwanted hems!

T-Shirt yard is great for other crafts, but it’s been disappointing when tested with DIY dog tug toys. The thin fabric just isn’t strong enough to stand up to play with my big boys. Recycled sweatshirt materials have ben tried, tested and work great though!

Recently, while cutting apart some old t-shirts to make quilts (see the DIY recycled t-shirt quilt instructions on our partner blog), I had an idea. When I first started making dog toys, I made Oli some denim knot dog toys from pairs of old jeans. I liked incorporating the side seams of the legs to make things more durable as well as reduce the risk of shedding threads. Perhaps the off-cut bottom hems could be put to use in slightly stronger t-shirt toys? Yes indeed. I salvaged the good bits for other recycled t-shirt fabric uses, and set the hems aside for toys. 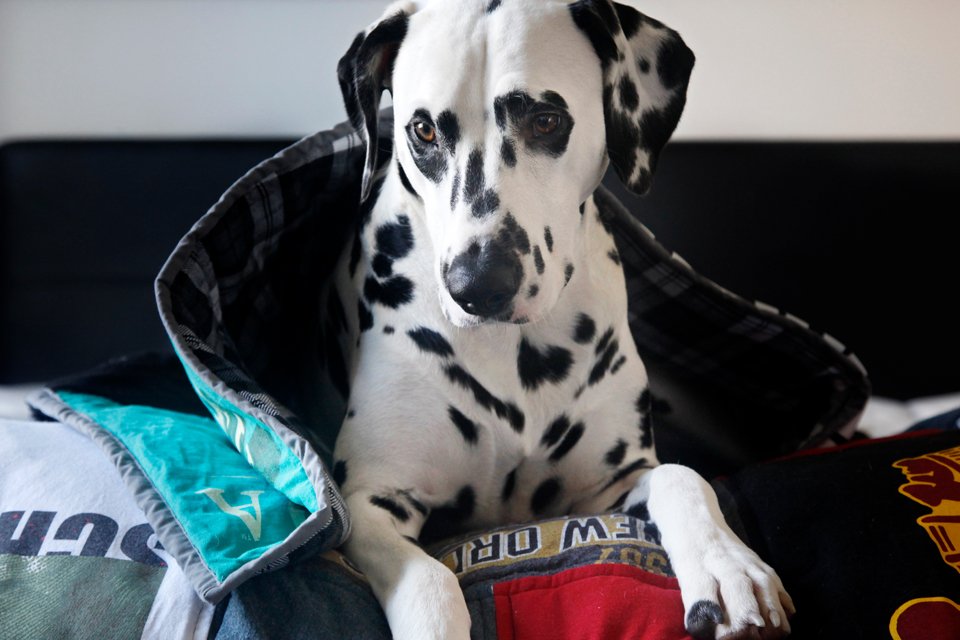 Unlike woven denim (and many fabrics) the tightly knit material of t-shirts and some sweatshirts isn’t prone to shedding threads. This is one of the reasons why I like using fleece when making tugs.  Using a non fraying material reduces the risk shedding threads, which can be dangerous if swallowed as well as creating a mess. If toys aren’t your thing or you just have tons of t-shirts ready for recycling, clean cut t-shirt material can be used similar to purchased knits for crafting. Just like I did with the dog’s recycled t-shirt cuddle quilts.

This recycled t-shirt hem ball is made by building up layers of knots to make a solid ball-like toy. The construction is similar to the original simple denim knots I mentioned above, but I think it’s even better. In addition to not having nasty threads, I was able to take advantage of the stretchy t-shirt materials to shape thing into a more rounded ball with all the ends tucked inside. Since I had extra large men’s t-shirts to work with, I used the hems as big uncut loops instead of strips. Smaller shirts may need to be cut or joined into longer strips for size.

If making a similar toy, make sure your finished ball is big enough for safe play and supervise carefully.  All balls, bought or made, can be risky, especially if undersized. See the tug toy below for a different shaped recycled t-shirt hem dog toy option.

A giant looping knot like this isn’t a uniform smooth ball, but it does have a ball-like shape if you work with care. You can take a little extra care on the final layers to position the fabric for an attractive finish.  Not that the dogs will object if things are a little less than perfect! You can also tie hems together or separately if/as needed to create size and/or to wrap the final loop ends into the ball.

From Scrap Time to Play Time

This is a variation on our square knot dog tug toy. Unlike basic t-shirt fabric strips, these wide strips of hem were very durable (surprisingly so). Making a scrappy tug toy was a great way to give the scraps a second useful purpose. Although the ball was a fun experiment, for my dogs and our style of play, a tug was a much better option for using my hems.

You can swap the hems for the fleece strips in any of our DIY dog tug toys. Depending on the style of tug and size of shirt, you might be able to use them as loops (similar to a pair of strands doubled up), cut to form a strip, or join strips for more length.

Since I had large t-shirts to work with, I used the hems as big uncut loops instead of strips. I made this tug as stick, with one concealed end and the other tucked.  I may mix it up with different ends in the future. Humphrey loves tassels… See our post on end knots for DIY dog tug toys for other knotting options and styles. We also have a post on tug toy strips and finished toy size if you need sizing information.

Even if your starting t-shirt hems were all the same size, you may find that you start to run out of knotting space on some hems before others. If this happens, you can continue with the remainder (try to capture any shirt ends inside the toy) until you can no longer weave. Alternatively,  you can trim and tuck, if you prefer. As a scrappy hem tug, a little imperfection is all part of the quirky character. 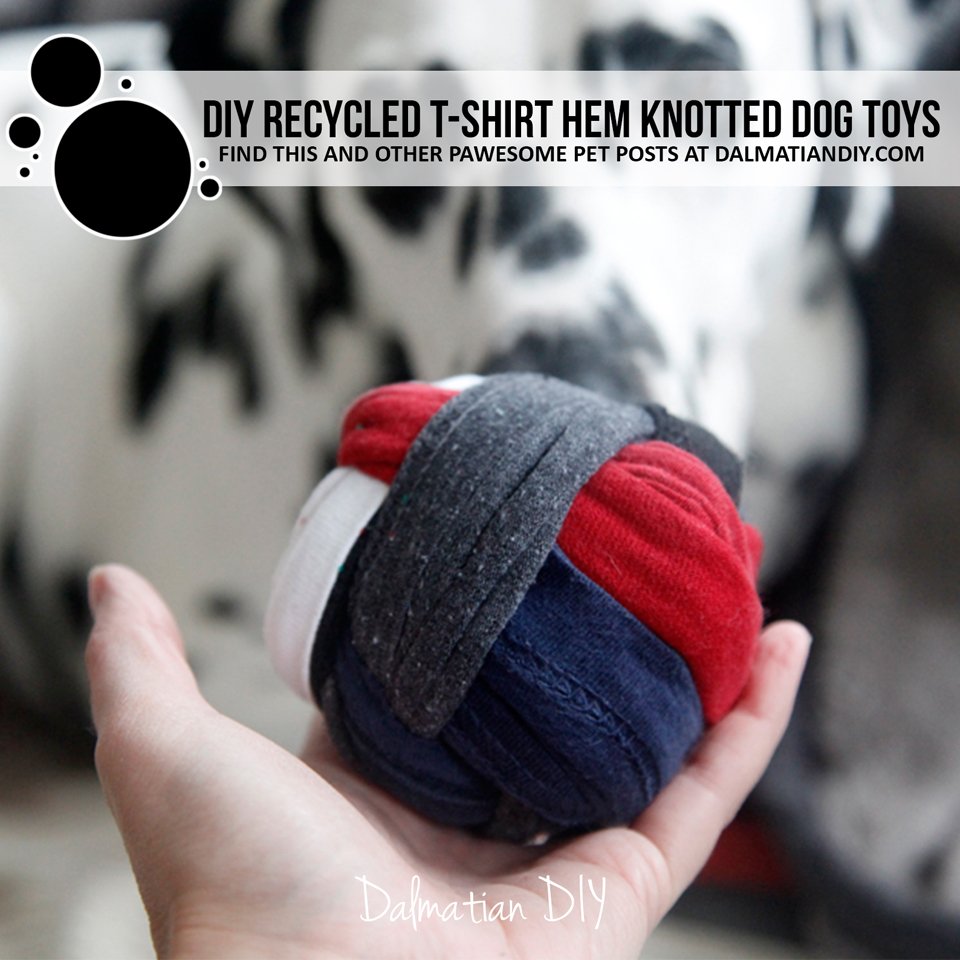 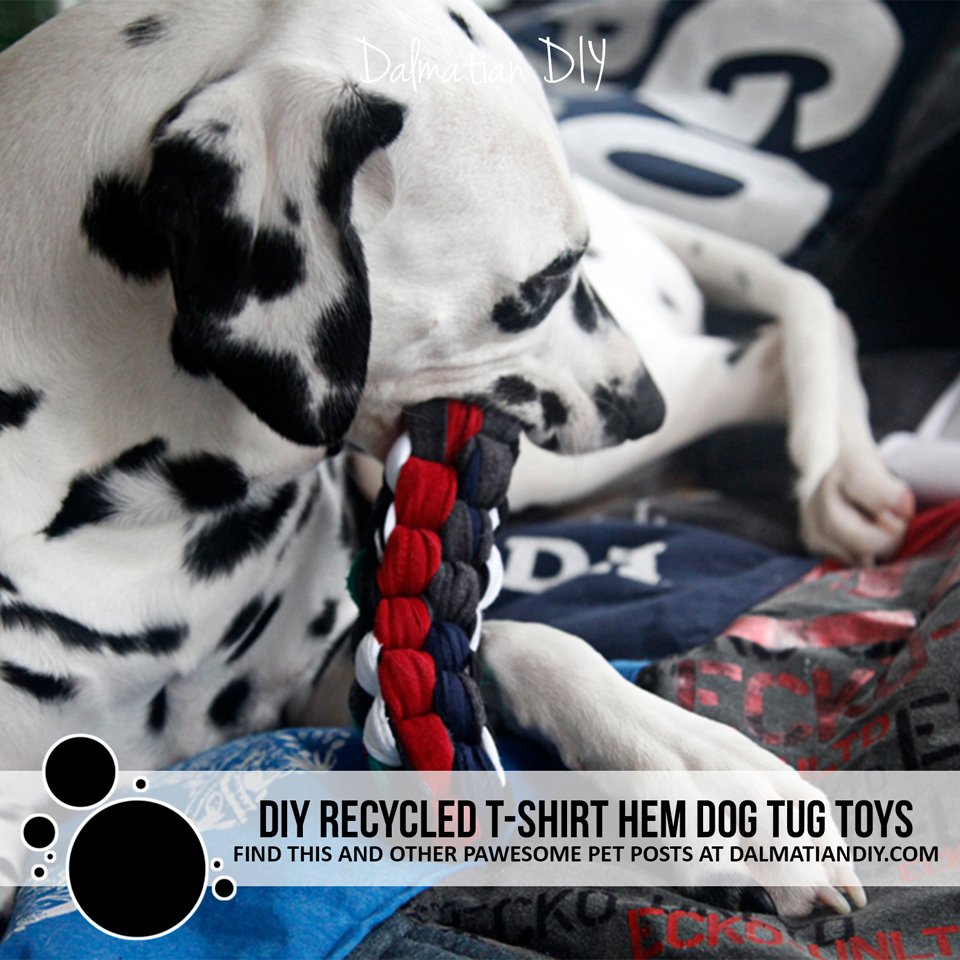