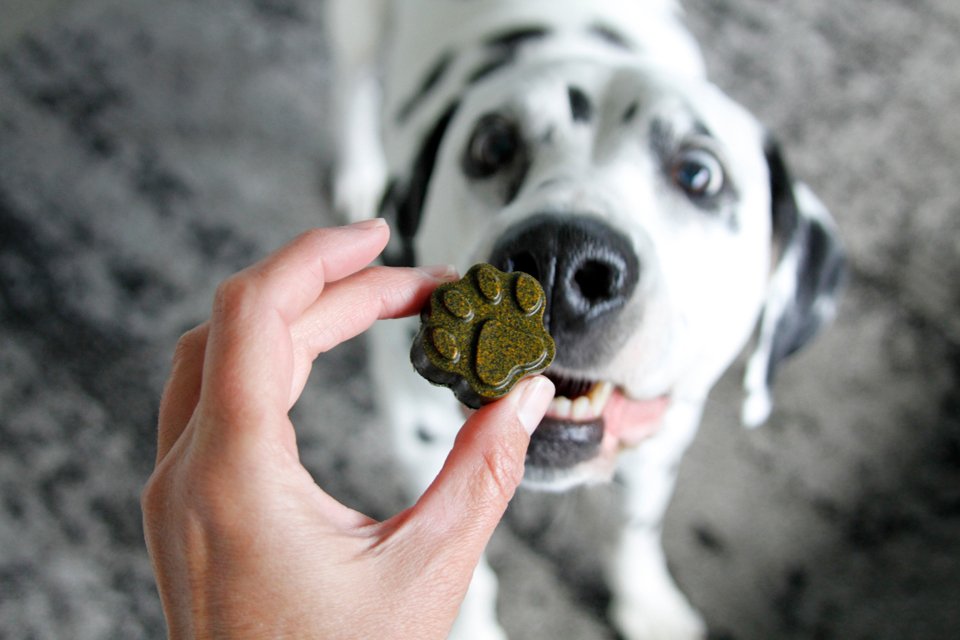 I often use turmeric in gelatin gummies and other treats. Turmeric has many potential health benefits (for people and pets), our dogs like the scent and flavour, and it’s a great natural colouring for tinting dog treats, too. Sometimes a little too great! Turmeric stains like crazy, but using it in treats make serving turmeric easy with less mess. Pawfect!

When using turmeric powder in gummies, it tints the gelatin a gorgeous golden colour, but doesn’t completely dissolve. Little bits of the dried ground turmeric often dissipate and settle in the gummies before they set. How much settles depends on quantity used, the type of turmeric powder, and your gummy making technique. You can use cooling and mixing before moulding to help hold these solids in suspension. Or you can use that knowledge to create gorgeous gold dusted gummies.

I’ve seen this speckling many times in our golden gummy turmeric treats, but inadvertently discovered the fun potential of using as it as a special effect whilst experimenting colour combinations for tinting. So I decided to create the special green and gold St. Patrick’s day gummies pictured above. I also have some other yummy gummy gold dust combinations with other colours later in the post. First up, let’s talk about mixing options. 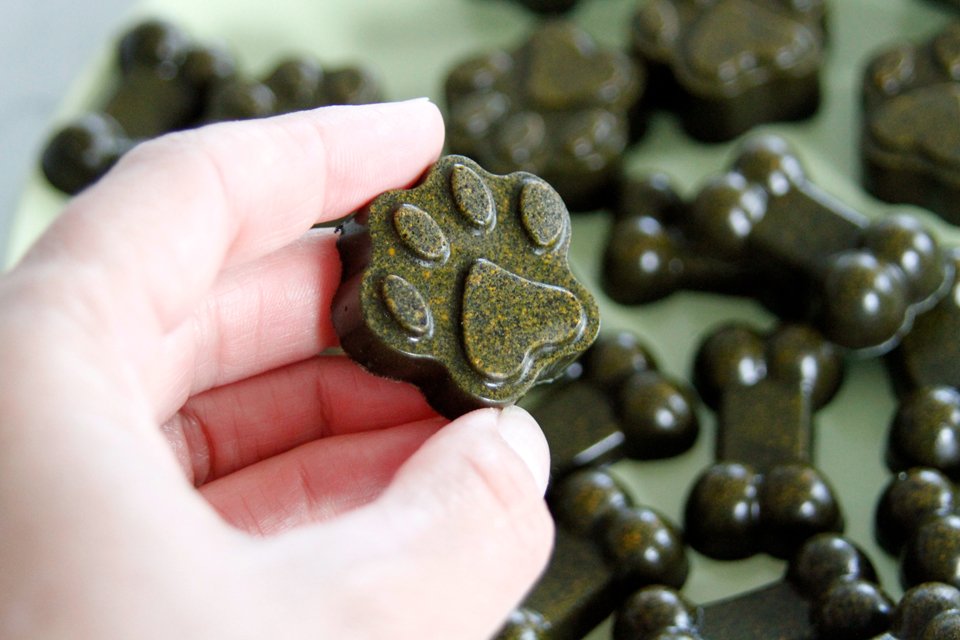 Including Turmeric in the Gelatin Mixture

The method used for the gummies pictured in this post is to include turmeric powder in the mixture. Some of the larger particles of turmeric (and accompanying black pepper, if included) will naturally settle and dust the base of the moulds with golden flecks.

Since we want the larger pieces to precipitate down and settle at the bottom of the mould (face of the treats), unlike many of our other gummies where we cool the mix to improve suspension, the gelatin mixture can be poured straight into the molds and then chilled to set. To increase settling, instead of popping the gummies straight into the fridge, you can allow them to cool on the counter for a while before transferring them to the fridge to set firm before unmolding.

Although some of the turmeric settles, it does colour the whole mixture, so beware. Use it to create treats where the addition of a yellow suits the colouring, or consider layering instead (see below).

This tip comes from one of our readers (Thanks, Laine!). Instead of mixing the turmeric into the gelatin, you can sprinkle the moulds with powder.  Unless you’re a very cautious filler, the gelatin will likely mix when you fill the moulds, but the settling will be the same as above.

If you’d prefer to avoid a colour shift in the main gummy, you can create a similar effect in a layered treat by mixing only portion of the gelatin mixture with turmeric and pouring as two layers with partial set-time in before the second layer is added. Buuuuttt, the dogs don’t care about the colour, so one pour with a deeper colour is a-ok by us! Keeping it cute but also simple. 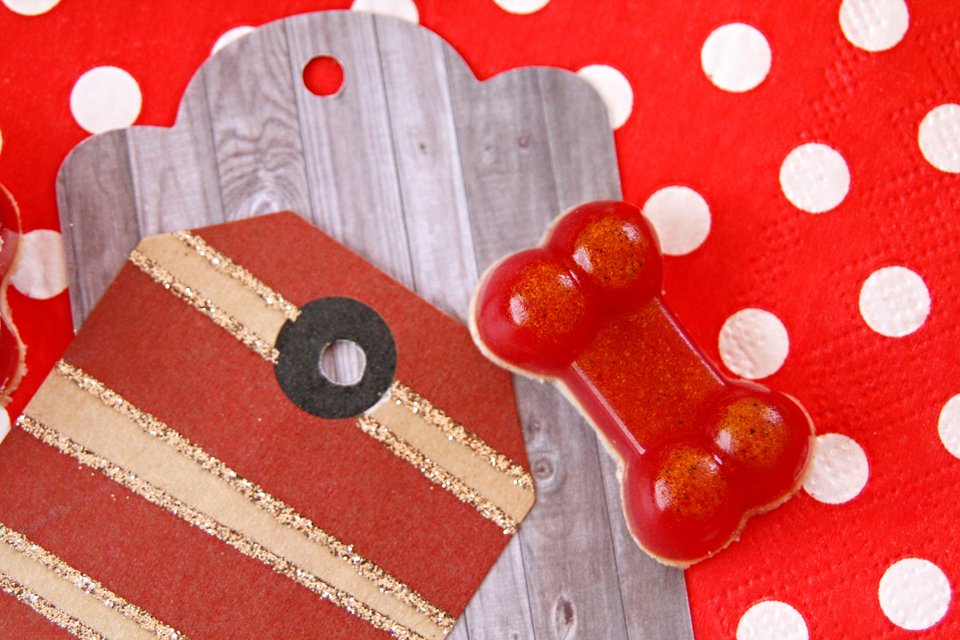 When making gummies in a mould, the settled turmeric will naturally dust the top of the treat (bottom of the mould). If you’re making set-and-slice treats in a pan, the bottom is usually the bottom, but the dogs won’t judge if you flip their treats over. Keep in mind if layering mixtures for multiple colours or flavours that only the true bottom will show settled bits, no matter which way you choose.

In addition to the colour of the base other than the added turmeric, as noted above, it’s best to choose a base that does have other solids that you want to suspend since that would be counter to wanting the turmeric to settle. Thinner more fluid bases will also allow more natural settling, so you’ll get better results if the recipe doesn’t use thick liquid or semi-liquid ingredients. 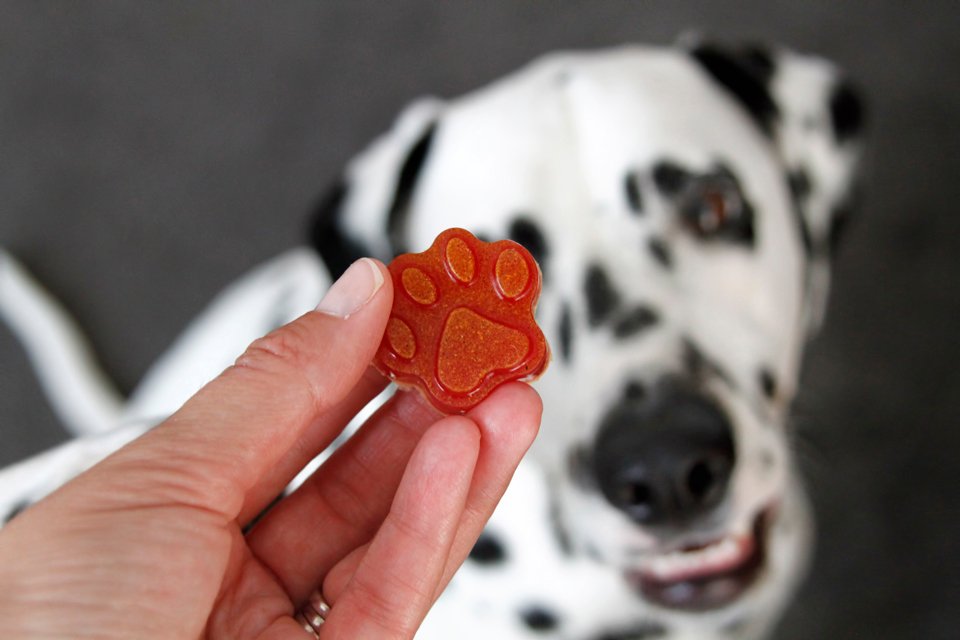 The easiest mixture for a gold dust treat is keeping it simple. You can add colour and flavour to the treat mixture with turmeric, like our golden gummy star dog treats and not worry about fully suspending the solids. You’ll see turmeric gold dust settling out on just about every gummy treat we make with turmeric. Naturally yellow-ish liquids, like our homemade chicken stock, are also a good pairing. 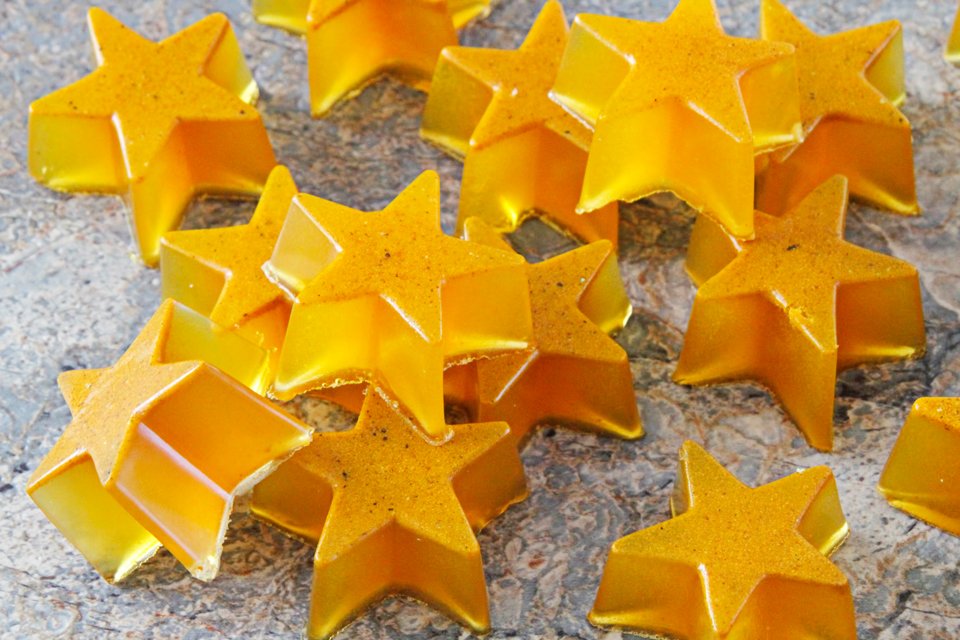 These Christmas gummies use beetroot with just a little bit of turmeric for my gold dust and I also added a sprinkle of black pepper. If you’re careful with quantities, the turmeric doesn’t take the colour too far away from the red of a plain beetroot gummy dog treat and into orange. The pictured gummies were also layered, with a turmeric tinted bottom milky yogurt layer for extra golden gorgeousness. We’ve had reader requests for a full recipe for these treats, so we’ll add it to our plans for Christmas posting prep and I’ll include a link here. Stay tuned! 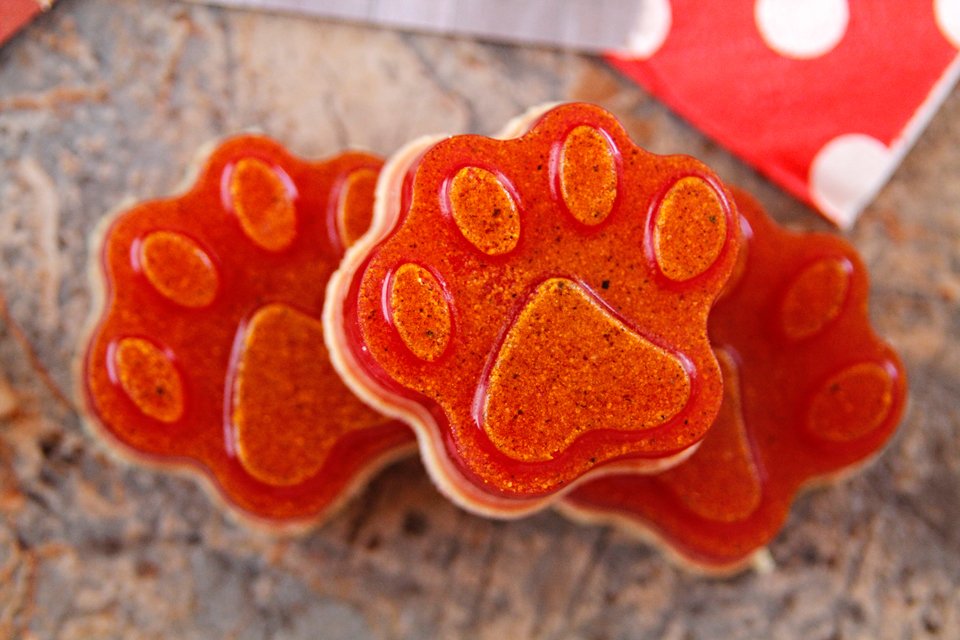 These St. Patrick’s Day gummies use a blend of kale and wheatgrass with just a little bit of turmeric for the gold dust. I also added a sprinkle of black pepper. They’re a darker shade than our usual green gummy dog treats due to the turmeric. A little on the brown side, but still distinctly green in appearance, with a light dusting of gold. These would also be fun paired with red for Christmas, like the treats above. Mix-and-match small batch gold dust gummy goodness! Or perhaps layered together? So many gummiess! We want to make and taste them all! 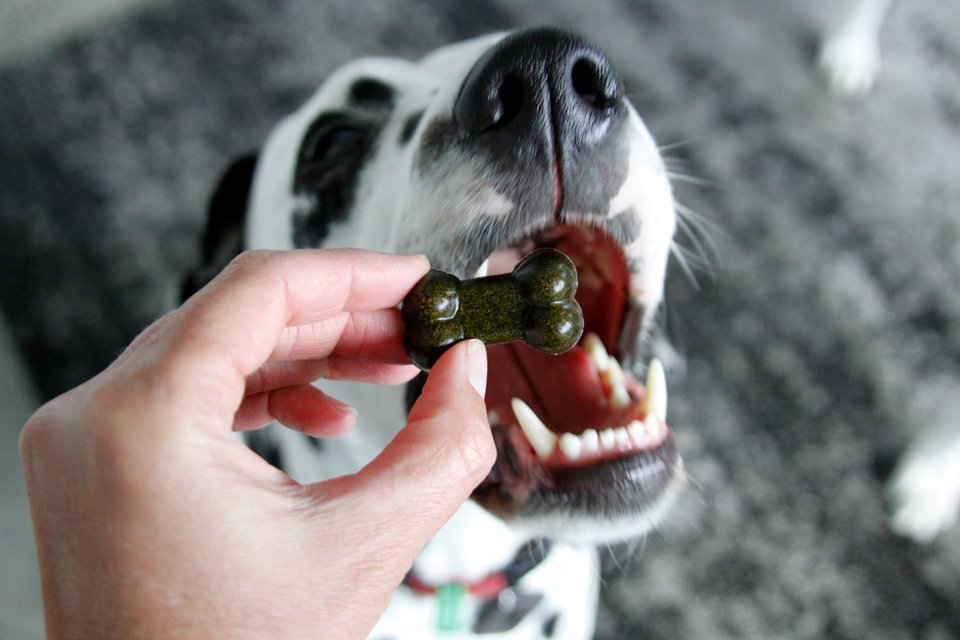 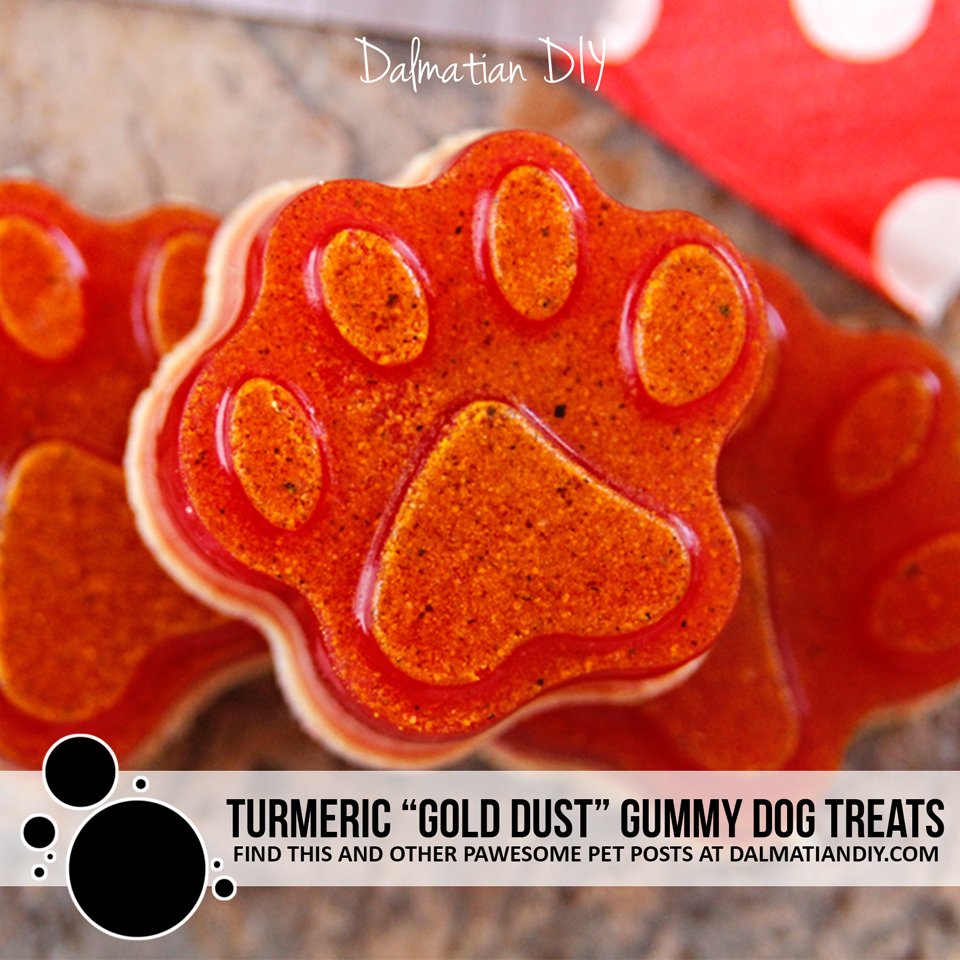